Colorradio.com - The Turbans
Must Have Javascript on
For The Slideshow To Work 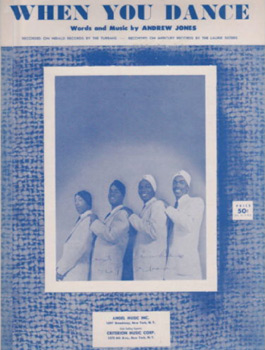 "When You Dance" may not have been the all time biggest selling records of the 50's, but it was a huge hit and will forever be considered one of the great vocal group classics of all time. Picking up on the early to mid 1950's mambo and Latin music craze, the Turbans had a distinctive sound that couldn't be missed. They initially signed with Herald records of New York, and had a group name problem. They didn't know what to call themselves. When it was suggested that they at least wear caps, the group in whole, revolted,. They tried on some turbans, and they found their name. The Turbans were from Philadelphia, and consisted of Al Banks, (soaring falsetto lead), Matthew Platt (tenor), Charlie Williams (baritone), Chet Jones (Bass). As with most groups, the lineup changed often. Their first record was their biggest hit, however a couple of their follow-ups sold very well. After 12 released sides with Herald, the group apparently were the Quadrells on Whirlin Disc, for one release. Then to Red Top records of Philadelphia...sort of. Members Donald Jones, Edward Cole, James Jenkins and Chet Jones were the Turbans, with no Al Banks in sight. Then to Roulette records with Banks, Jones, Earl Worsham and John Christian. At Parkway it was minus one Chet Jones and the addition of Reggie Price. At Imperial, they lost Price, but added James Williams and Sonny Gordon. 7 years of recordings and the Turbans called it quits. They never were able to match the sales of the Herald label recordings, but were a popular group with a load of talent. The Falsetto of Banks and the tempo changes they were noted for during the instrumental breaks, were typical and recognizable trademarks of this fine vocal group that made their mark in the history of rock and roll. 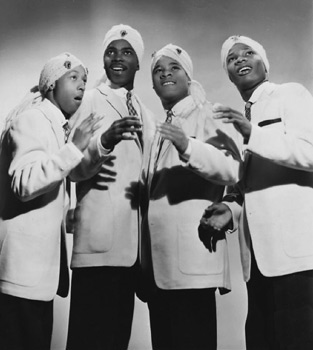 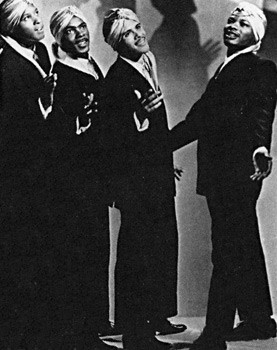 The Turbans first release, on the original Herald label. By release 458, the Herald label original pressing was yellow, had 45RPM on both sides of the label, and the flag at the top with Herald inside. The writing was also small. "When You Dance" was the Turbans biggest hit, though several of the Herald releases reasonably well. "Let Me Show You (Around My Heart)" was the flip. Released in 1955.

The third press is the multi-color label as shown. The writing is big, 45 RPM is only on the left, and the original writing credit is back to just Andrew Jones.

The Turbans follow up was very successfully, especially in many of the southern states. "Sister Sookey" was a catchy song and sold well. "I'll Always Watch Over You" was the flip. Released in 1955.

"Sister Sooky" on the second pressing of Herald records, notice the slight spelling difference between this and the previous issue. "I'll Watch Over You" has added a writing credit. Seems Herald had an issue with writers and who's on first! Also, The word "Always" was removed from the "B" side title. And, sookey vs. Sooky.

Release number 3 is from 1956. "I'm Nobody's" is the "A" side, flipped with a fun up tempo song about a popular game, "B-I-N-G-O." Sales were not as forthcoming compared to the previous two releases.

Here is the Herald 78 of the Turbans next issue, the calypso influenced "It Was A Night Like This". Another fine song from the Turbans, and the "B" side was "All Of My Love". Released in 1956.

The 45 RPM version. The small print and larger flag stopped at Herald 476, and this appears to be the first press.

From 1957, this release does not follow the guidelines of label identification. This should have the small flag and bold print, but actually appears as a pre-Herald 476 release. "Valley Of Love" is the "A" side, and the flip is "Bye And Bye".

The last release for Herald by the Turbans, "Congratulations" is backed with "The Wadda Do". Pictured is the promo copy sent to the radio stations to plug the record.

Here is a stock second pressing on Herald. The writing should be smaller as shown in the promotional copy above, for it to be a first press.
c

The next stop for the Turbans was right in their own backyard. Red Top records, owned by Irv Nathan and Marvin "Red Top" Schwartz, was in Philadelphia, and they cut one record for the label. "I Promise You Love" backed with "Curfew Time" was issued in 1959, minus Al Banks. It was not a big seller, so they moved to a different record company.

Roulette records was a big player in the record industry in 1960, and the Turbans waxed a cover of the Paradons song "Diamonds And Pearls." The flip was written by the Turbans lead singer Al Banks, and was called "Bad Man."

In 1961, the Turbans recorded the second and last record for Roulette called "Three Friends (Two Lovers)." "I'm Not Your Fool Anymore" was the "B" side, again written by Al Banks. The promotional copy is shown.

Here is the regular stock issue. Notice the co-writer on the Three Friends side, which is Burt Bacharach! 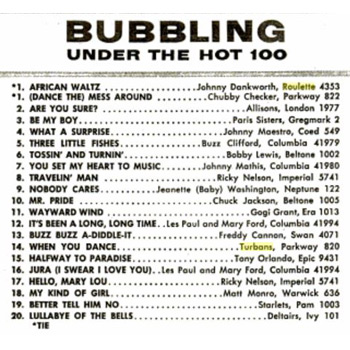 There could have been a a third release! However, it only made it to the demo stage, and was never released, The date puts it very close to the previous issue, so it may have been scheduled until the Turbans jumped ship to parkway. "All She Wants Is Dance" is the title of this one sided test pressing, and it is actually a pretty decent song. You probably won't find this one anywhere but here! The writing on the upper left side of the label is hard to figure out, but it looks like a name and then a N/G, (No Good?). A Bubbling under trade ad (above right) is for the next Turbans release (below).

A brief stop at another local Philadelphia label, Parkway, and another record by the Turbans. A re-record of "When You Dance" was promoted in 1961, and the flip was "Golden Rings". The white label promo is shown.

The regular stock, orange label Parkway release. It is mostly identical to the promo.

The Turbans last stop was another big label, Imperial. The first of three records for Imperial was a fine ballad called "Six Questions". The reverse was "The Lament Of Silver Gulch." Released in 1961.

This is the stock Imperial issue. Some very slight differences in the label information are apparent.

Record two for Imperial, released in 1962, was a rendition of Gene And Eunice's "This Is My Story". "Clicky Clicky Clack" was on the flip.

Closing out the Turbans career, was their last Imperial release, "I Wonder (I Wanna Know)." The "B" side was "The Damage Is Done". The Promo, or as Imperial often said, "For Audition", copy is shown.

Here is my stock copy, which has the rainbow effect at the top. The promo had the crown at the top. Imperial did not stick with a completely straight-forward label design, based on record numbers. A crown label stock copy could possibly exist.