Colorradio.com - The Blue Jays
Must Have Javascript on
For The Slideshow To Work 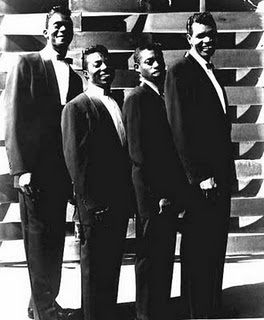 The Blue Jays, featuring Leon Peels, Had a Billboard chart hit in 1961, that peaked at number 31. If you were in Los Angeles, it was irrelevant because the song was played more than that number would indicate, and it reached much higher on many local charts anyway. The Blue Jays shown to the right, left to right,were Leonard Davidson, Bass, originally from Pennsylvania, Alex Manigo, second tenor from Santa Monica, Van Richardson, first tenor, also from Santa Monica, and Leon Peels, lead, originally from Arkansas and then living in Venice, California. Peels and Manigo wrote Lover's Island sitting on the beach in sunny Southern California. They met Werly Fairburn who owned Milestone records, and he was interested in a group, and after hearing the Blue Jays, was interested in their group! Fairburn had cut many records of his own, and with Milestone, had produced a hit with the Paradons called "Diamonds and Pearls." He thought that the Blue Jays were good enough to have the next hit record for his label. He booked them into the Master Records studio in Hollywood, and they cut Lover's Island along with a song they didn't write for the flip, "You're Gonna Cry." It didn't take long to get the record to the DJ's in southern California, as back then, they were easier to talk to, and the process of getting a record played was much less complicated. They ended up with airplay all over the country, but did not appear on shows outside California. Needing a follow-up, Peels wrote "Tears Are Falling" influenced by events in his own life, and the Blue Jays were back into the studio to record and release their second record. It didn't hit the national charts, but did very well on the west coast. Stations like KRLA and KFWB had it in their top 20 lists, and it made a list on WNHC in New Haven, CT. More singles followed, but no chart action of note did. The Blue Jays broke up and Fairburn took Peels with him to Whirlybird records, a new label with Werly's name in mind. Backed with a different group called the Hi Tensions, he was on two records. "A Casual Kiss", was another west coast record that had local chart action, but did not break nationally. Soon after, Leon Peels' son passed away, and he no longer was interested in singing. Leon Peels high flying tenor was unmistakable and amazing. 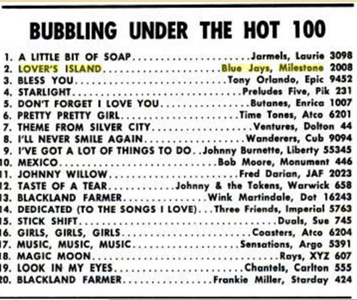 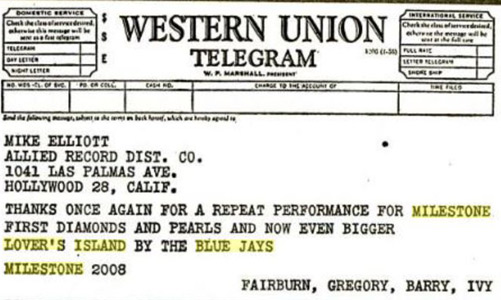 The Blue Jays had their biggest hit with their first recording in 1961. "Lover's Island" was a top 40 Billboard hit, reaching number 31 in August of 1961. Co-Written by Leon Peels and Alex Manigo on a beach near Venice, the song spoke to a lovely island where all dreams came true, possibly paradise! The flip side was an up tempo recording called "You're Gonna Cry." Pictured above is the first issue on the green label. Look at the middle left. It appears that the label information was on a square piece of paper that was put over the top of the label design.

This is an odd blue and silver press. I'm not sure when this came out, but I don't recall seeing it on any of the other 18 releases for Milestone. It has many similarities to the first all green label with the ribbon on the right and the pasted text over the design on the middle left. My guess is that it had to be the first or second variation. Maybe they ran out of the green colored paper, ala the Penguins on Dootone?

Here is a label variation of the green pressing. You can notice some of the writing is bigger, most notably the record number. Also, the ribbon is now on the left side. Additionally notice that the information on the middle left looks more natural then the previous label.

Here is the green and white label which came out a bit later. It is pretty much identical as far as the information goes, just the colors have changed.

This is the second release by the Blue Jays. "Tears Are Falling" was an excellent follow-up ballad, in the same style as Lovers Island. It was not a Billboard chart hit, but substantial airplay was given on the west coast, and some regional markets across the country. The flip is the up tempo"Tree Tall Len." This was written about the Blue Jays bass man, Leonard Davidson, who was quite tall. This record was released in 1961.

Leon Peels and the Blue Jays next 1961 release was also the next issue for the Milestone label. "Let's Make Love" was another ballad that was doo wop, and without Peels answering himself like he did on the first two issues. Maybe it was the subject matter, or the record buying public wanted something else. On the "B" side was "Rock Rock Rock", a decent up tempo rock and roll song, with a few Who's thrown in by Peels for good measure.

Release number four used one previously issued "B" side song and paired it with a new one. "The Right To Love" was another ballad that was really quite good. The addition of a flute added a slightly new dimension to the recording. The flip was "Rock Rock Rock" previously seen on Milestone 2010. Released in 1962

The last effort for the Blue Jays was likely the poorest seller. Too bad, as it was another great ballad featuring Leon Peels. Still with that doo wop feel, "Venus My Love" was a great record that just didn't catch on, or get much airplay. The flip was the same as the "B" side of Tears Are Falling, but slightly re-named. "Tall Len" was the same as "Tree Tall Len" from the flip of their second recording. That was to be the last record by the Blue Jays. Soon after this 1962 release, the Milestone label folded, and the Blue Jays broke up.

When Milestone went out of business, Werly Fairburn partnered with Former entertainer Madelon Baker. He had worked with her on the Paradons "Diamonds And Pearls" disc. She and her husband had a recording studio in Hollywood, called Audio Arts. Fairburn became a producer for them and recorded several songs with Leon Peels, but just a few saw the light of day. The new label they created was called Whirlybird, supposedly a play on Werly Fairburn's name. The first record on Whirlybird belonged to Johnny Flamingo, but the second was Leon Peels. As shown, he was listed as a single artist, but was backed by the Hi Tensions, a new studio group for Audio Arts. "A Casual Kiss" was the plug side, and did very well on the west coast in 1964. It was another great ballad that was typical of Leon peels. "Cottonhead Joe" is an up tempo rock and roll record that was not too bad. This record was pressed both on vinyl and styrene.

The last released record by Leon Peels was from 1964, on the Whirlybird label. "A Magic Island" tried to recapture the success of Lovers Island. It was a fine ballad in it's own right. Once again, the Hi Tensions were the backup group, and since they had several legitimate records on their own, they shared billing with Leon Peels. The flip was a nice mid tempo recording called "Darlene." As with the previous Whirlybird record, the plug side was written by Jim Aguirre, and the flip by Leon Peels.