Colorradio.com - Johnny Otis
Must Have Javascript on
For The Slideshow To Work 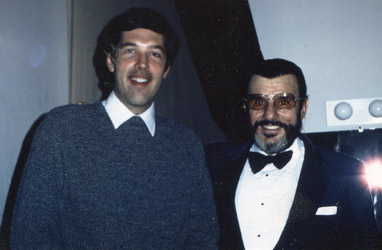 Backstage with Johnny Otis at a concert in the San Francisco Bay area on October 21st, 1989. The show was at Kimball's East, and was the usual fantastic show you might expect from Johnny and his ensemble. As part of the Doo Wop Society of Northern California, we were able to present him with an achievement award, and meet him in his dressing room between sets. Johnny passed away January 17th 2012 three days before Etta James. Born on December 28, 1921, in Vallejo, California, he dropped out of school and ended up in Los Angeles. Some people called him the godfather of rhythm and blues, but without doubt, he was a very important part of our musical history. He had a radio show in Los Angeles on KFOX for several years,also a show in the 1980's on KPFK, and after moving to Northern California, a show on sister station KPFA. Below is just a few of the hundreds of records that Johnny was associated with. 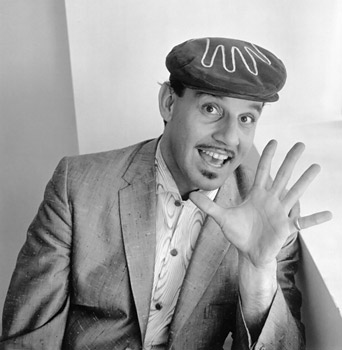 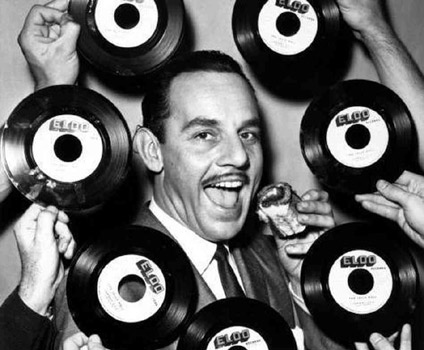 From 1953, it's uptempo rock and roll, "Rock Me Baby" with a group. The flip side is a Ballad (Mostly), called"Young Girl" also with a vocal group in the background. He was involved with at least ten records on Peacock, either on his own, or backing artists like Big Mama Thorton and Little Richard.

A cool two part instrumental by Johnny Otis and his band. "The Midnite Creeper"parts one and two. Released on his Dig label, Johnny is listed as the writer for both sides. This was also on his LP "Rock And Roll Hit Parade. Released in 1956.

Another of his two part instrumentals, this is from 1957, again on his Dig label. "WAWA" part one and two. Almost a novelty rocker, it is a fun disc.

His biggest hit by far, "Willie And The Hand Jive" just caught on. It was a set of movements that also were set to dance, it got into the top ten, peaking at number none . It stayed around the charts for a total of sixteen weeks in 1958. The labels now indicated "The Johnny Otis Show", and a show it was!

Here's a nice clip of Johnny Otis singing Hand Jive live. Notice the three tons of Joy in the video demonstrating the movements! Also watch for Lionel Hampton near the end of the clip. Johnny just can't stay sitting down at the piano. This appears to be a clip from a little after the success of the record. It also looks like a clip of a full length show. Not bad quality considering and we are fortunate to still have the clip.

There may be more than one stereo 45's on Capitol records. This is "Telephone Baby" and the same song was on both sides of the record. Notice that Marci Lee gets vocal credits along with Johnny Otis.

My favorite from 1957, "Ma, He's Making Eyes At Me", with Marie Adams and the three Tons Of Joy. On the flip side, "In The Dark" was a real blusey smoker. This is just a great two sider.