Colorradio.com - The Kuf-Linx
Must Have Javascript on
For The Slideshow To Work 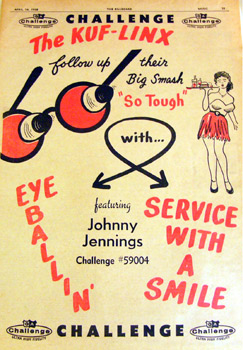 Well, She's So Toooough....That's Why I Love Her... Love Her..... That was the opening line of a great record that came over the airwaves in late 1957. The first version of it was actually by a group called the Casuals, soon re-named the Original Casuals. Within two weeks of the Casuals record being reviewed by the trade papers, the Kuf-Linx brought their own version out for a listen. You could hear both versions on your local radio station, though the west coast DJ's picked up the Kuf-Linx record a bit more than the east coasters. The Casuals record peaked at #42, while the Kuf-Linx got up to #76. Both were good sellers, but neither group was able to get back on the Billboard charts with a follow-up. The Kuf-Linx are not an easy group to follow. Nor is the song So Tough, especially since there were at least three different groups that sang the song, and close spellings of the same group. The Kuf-Linx consisted of John Jennings (lead tenor), Johnny Woodson (tenor), Gaines Steele (tenor), George (Biggie) McFadden (bass), Leo Z. Manley, Darrell Johnson, and Gwen Johnson. Jennings and McFadden had been in the Jubalaires in the mid-40s. L.Z. Manley was a well-known gospel lead singer, who had been with the Heavenly Gospel Singers and the Stars Of Harmony. Gaines Steele, younger brother of gospel great Silas Steele, sang with Detroit-area gospel groups and a West Coast Ink Spots group (with Clifford Givens); in the mid-60s, he was a member of the 4 Tunes. Gwen Johnson was a Los Angeles session backup singer singer. This basic group consisting of a whopping seven members, likely recording as John Woodson and the Crescendos on the Spry label. That group was not related to the Nasco group called the Crescendos. The Spry label group actually waxed "All That's Good", which also appeared in a re-recorded, hotter version on the "B" side of the Kuf-Linx last recording. That is the easy explanation. Then there were the Cuff Links that recorded for Dootone and had a hit with Guided Missiles. The record changed over to Dooto midstream because of a legal issue. They went on to record their version on So Tough on Dooto, and then it quickly disappeared. There are other groups involved, and for the complete explanation, visit Marv Goldberg's web page. The picture, below right, and some text shown here are from him 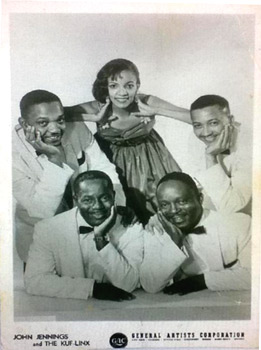 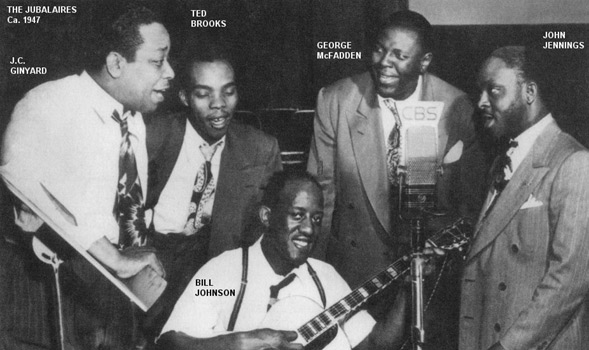 Above to the right side of the text, is a page right out of the April 14th edition of Billboard magazine. Challenge took a full page ad out for the Kuf-Linx follow up record, and you can see that their is some "confusion" on which side to promote. The arrows showing both sides of the record indicate to me that Challenge would be happy with either side getting airplay. It probably was not the best strategy to take for a follow-up from a big hit. The graphics are very cool. and notice that John Jennings name is promoted, just like it is on the record label you will see below.

The Kuf-Linx big hit was first issued on Challenge 1013 in December of 1957. Reviewed by the trade papers in December of 1957, "What 'Cha Gonna Do" got three stars and was listed ahead of "So Tough", which also received three stars. The rating system had a maximum of four stars, so the Kuf-Linx were off and running. This early block design started with the very first Challenge issues, and could be found as dark blue on those.

Though most label discographies show the light blue label above as the first design for the record number 1013, Challenge obviously pressed some with the block letters as shown previously. This label design shown t was used for at least six issues, 1008 through 1013. The Delta number in the dead wax, 19275/76 dates this to December of 1957. This MAY have been the last record on Challenge to use this label style.

Challenge records changed their logo yet again, this time taking away the half circle and using an oval on the top, with the moniker. BMI is now shown on the middle left. They also went to the maroon label color which they would stay with for awhile. All other label information stays the same.

Staying with the 1013 issue on Challenge, this is the black label. Visually, it looks like a later pressing with the larger block letters of the logo, and the fairly plain label design. Though the information is the same, the address was dropped like the release above.

I continue to follow the first record, though we go out of sequence for their recordings. This was a re-release, using a different Challenge record number - 59102 - but keeping the same master numbers of 139/140. This record was issued in 1961.

This is an odd release with a green label that used the same label design, same master numbers, same everything else except record number. It is now on a 51000 series as number 51003. Release date is unknown, but interestingly enough, the same delta date code was used on all the Challenge releases of So Tough, except the first light blue issue, which did not have one.

The Kuf-Linx had a great two sider as a follow-up. "Eyeballin'" appeared to be the plug side and "Service With A Smile" the flip. Both sides were outstanding, which unfortunately, can be a problem. When the radio stations don't know which side to play, you have a hard time jumping on one side and focusing. This promotional copy was released in March of 1958.

This is the stock release of Eyeballin' and Service With A Smile. I absolutely love both sides of this record, and makes for a fantastic "twin spin double play" on my radio show. Both sides got three out of four stars..