Colorradio.com - Kathy Young
Must Have Javascript on
For The Slideshow To Work 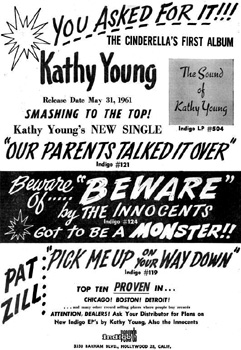 Kathy Young recorded her first record just before her 15th birthday, and soon found herself riding high on radio charts all over the country. A Thousand Stars peaked at number three on Billboard, but in reality, she had the number one record on most radio stations everywhere. It lasted over three months on the national charts. Darn respectable for someone who just a few weeks earlier had been "discovered" at a Wink Martindale show in southern California. She was born in Long Beach, California, and according to the Billboard magazine Music Week, she played guitar and enjoyed surfing, song writing and arranging. She had a trio of songs on the National charts and several others at the local level. Kathy Young had the Innocents as her backup group, who were stars in their own right, and she recorded two duets on the Monogram label with established star Chris Montez of "Let's Dance" fame. Several singles, an EP, an LP and four appearances on the Dick Clark show set her career in motion. She traveled the country appearing with stars that would make up a who's who list of music entertainers from the early 60's. Shown below are many of her records as we travel on a journey through the records and record labels of Kathy Young! 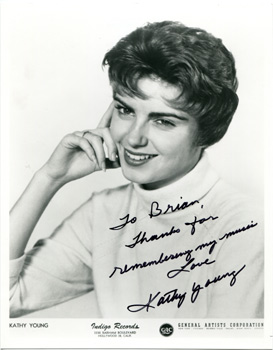 Kathy Young had her first release in 1960, and it resulted in a number three record that spent seventeen weeks on the Billboard charts. "A Thousand Stars" was a monster that included the Innocents with the back up vocals. Though it never reached number one nationally, it hit that high on many local charts, especially on the west coast. Shown above is the promotion copy of "A Thousand Stars" flipped with "Eddie My Darling"

This is the stock "Neon logo" release of "A Thousand Stars" The song was originally done by Gene Pearson and the Rivileers about six years earlier than this issue. On the flip, "Eddie My Darling" was a a great slow doo wop that again featured the Innocents supporting Kathy Young. For more on the Innocents, go to my page HERE!

Here is a second pressing of the same record, "A Thousand Stars." The Indigo banner has changed from a somewhat neon effect, to block letters incorporating the same unique colors. Even at such a "young" age, Kathy Young wrote the flip side. The music publishing changed on the hit side from Dare to Challenge. 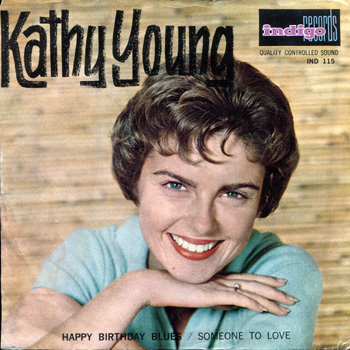 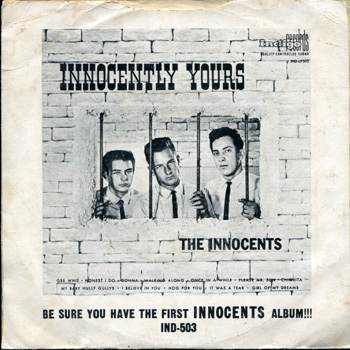 Kathy Young got her first picture sleeve on her second release. A nice picture so that her fans could see who they were enjoying on the radio, and buyers got it when they purchased her hit "Happy Birthday Blues." The flip side of the sleeve is a promotion for the newly released Innocents LP. Great cross-promotion for the label.

For her second recording, Kathy Young had "Happy Birthday Blues" which was issued in early 1961. Her second 45 was her second hit, this time up to number 30 on Billboard. Blue Indigo Music has publishing on both sides. On the flip, it's another Kathy Young penned song, "Someone To Love." A mid tempo song that incorporates a nice group sound. The Innocents are again credited as the backup group on both sides. 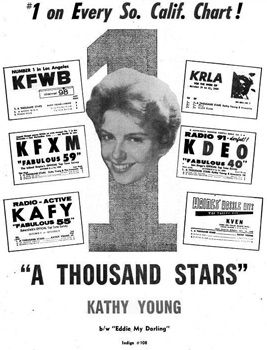 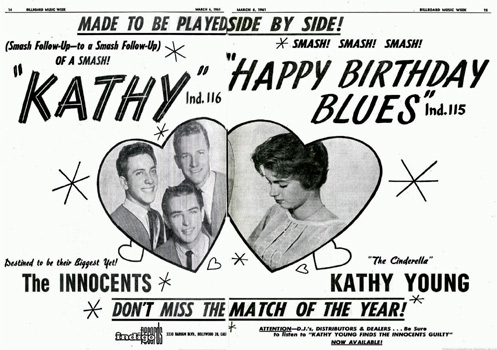 "Our Parents Talked It Over" was next in line for Kathy Young and the Innocents. It did not hit the National charts, but made many local lists. It was done in the same style as many of her great previous records. "Just As Though You Were Here" is a dreamy ballad that includes at least the Innocents in the background, maybe more. A bit of a different style of record for her, but certainly enjoyable. Released in 1961. 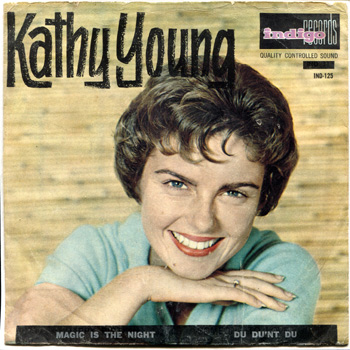 Back to the national charts, Kathy Young had "Magic Is The Night" from September of 1961. Peaking at number 80, it spent just three weeks on the Billboard charts. However, it made many regional and local charts and lists, so got more airplay than it might seem. A great picture sleeve was also available for record buyers, with the same photo that is shown for Happy Birthday Blues. The Innocents LP is still being promoted on the back of the sleeve.

This is the record from the sleeve shown above. "Magic Is The Night" should have fared much better than it did. Writer credits go to producer Jim Lee of Indigo records. The up tempo"Du Du'nt Du" is a nice flip to this great two sider from Kathy Young, with the Innocents providing the background vocals on both sides.

Taking the classic song from the Shells, "Baby Oh Baby" is a great doo wop. It starts with the Innocents doing the intro, and Kathy coming right in on queue. One of her best, it features some great harmonies and strong vocals from Kathy Young. The flip is the Platters song, "Great Pretender." It features a 20 second intro, and the Innocents doing light background vocals. Another strong two sided recording.

Kathy Young sung a Rosie Hamlin song for her next release. "Lonely Blue Nights" included the Innocents, even though they are not credited on the record label. On the flip is "I'll Hang My Letters Out To Dry", a nice ballad with no sign of the Innocents. The Innocents were off to another record company, so other plans had to be made at Indigo. The Don Ralke orchestra is credited for the first time on any of Kathy Young's releases. Issued in 1963.

The last release on Indigo records for Kathy Young was "Dream Awhile." Issued in 1963, it is curious to note that the record number used by Indigo was the next one available after her last issue, #147. Sometimes that means a record has been pulled out of production suddenly, and another is issued. Sometimes it can be lack of records from other artists on the label. "Send Her Away" was on the "B" side. A female backup group is on this recording. 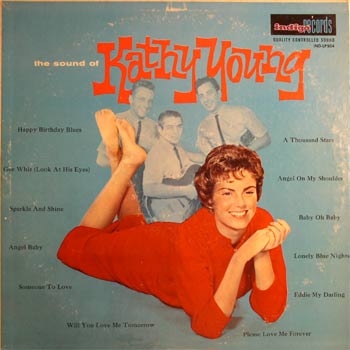 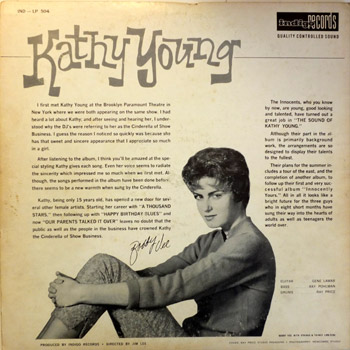 If the Innocents can have an LP, so could Kathy Young. And it was well deserved. Some excellent song choices, including two of Rosie Hamlin's songs, along with several of her hits to date. Bobby Vee does the Album liner notes on a record that has no filler. Great pictures on the cover, too!

These are both of the record labels for Kathy Young's LP. She sang a Cathy Jean song, "Please Love Me Forever" on the A side and on the B sides, the first time she recorded "Sparkle And Shine" We will see that again shortly.

Here is Kathy Young's first release on the Monogram label. "(Hey There) Dreamboy" was the side to click and the flip is "I'll Love That Man." A fine two sider and arranged by Jack Nitzsche. Distribution shown by Era Sales.

Kathy Young teamed with Chris Montez, and did a few duets. Above is "All You Had To Do Is Tell Me" on the Monogram label. A ballad that garnered some airplay in certain areas, but not enough for the national charts. Both voices were distinctive, and it is a pleasing song. "You're The One" was on the "B" side, and was written by Indigo producer Jim Lee. The song was actually first seen on the flip side of Chris Montez's monster hit Lets's Dance. It appears that the exact same track that featured Montez with a solo effort, was "borrowed" and Kathy Young overdubbed her vocal parts to create the new sound. Another nice ballad for the duo. Released in 1963, the promo copy is shown.

The second and last issue for Monogram as a duet with Chris Montez, "Shoot That Curl" was a fun song aimed at the surfing sound, and as mentioned at the beginning of this page, was a hobby that Kathy enjoyed. "It Takes Two" made sense to use on the flip side of the record. Another 1963 release and the promotional record is shown.

From the early 1970's, a Port record label reissue of the two sides of Kathy Young's first record. Port reissued a few records during the oldies revival, and did the same in the early 60's with some of the great doo wops of the 50's. They also had a few original records on their label. 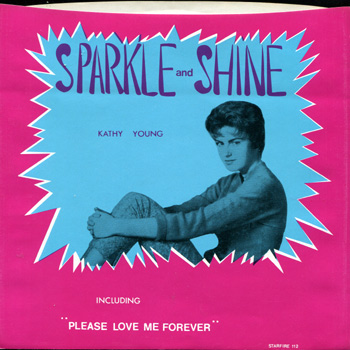 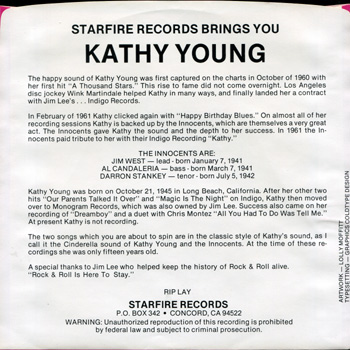