Colorradio.com - T.J. Lubinsky
Must Have Javascript on
For The Slideshow To Work

T.J. Lubinsky was born in Bradley Beach, New Jersey. His grandfather, Herman Lubinsky Sr. founded Savoy records, an amazing record label based in Newark, NJ. TJ is well known for the PBS musical shows he has produced, which at this writing is over forty programs. At WQED in Pittsburgh, he started with Doo Wop 50 which was filmed in 1999 at the Benedum Center in Pittsburgh. The show featured some classic groups like the Skyliners, Penguins, Marcels, Flamingos and many more. Below is a picture of myself on the right, TJ Lubinsky in the middle and Record Collector/Historian Randy Tamberg on the left. This was taken at the 2002 Red, White, And Rock program, which was TJ's lucky thirteenth production at WQED. It was an amazing show that was taped over three nights, and so many different acts. I was able to go back stage every night and meet many of the performers. Since Then, TJ has produced a wide variety of just about every musical genre you can think of, all very interesting shows. And as usual, we have performances by some of the greatest artists of all time. You can listen to my interview with TJ Lubinsky HERE. 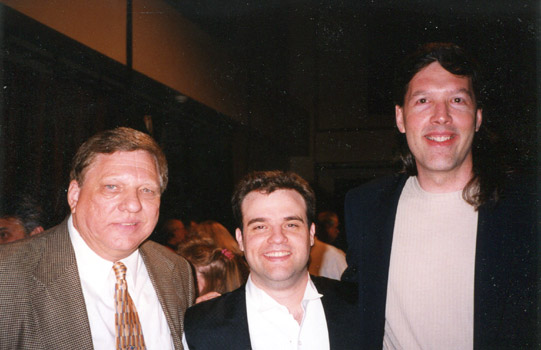