Colorradio.com - The Jive Bombers
Must Have Javascript on
For The Slideshow To Work 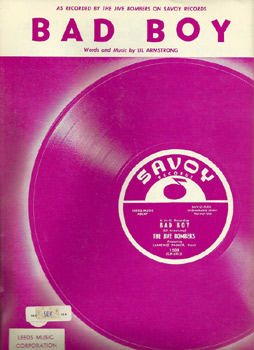 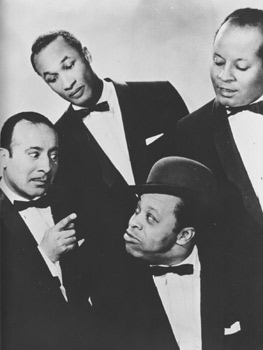 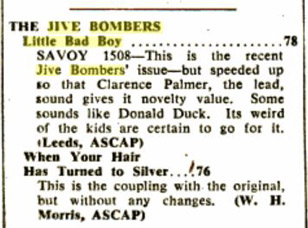 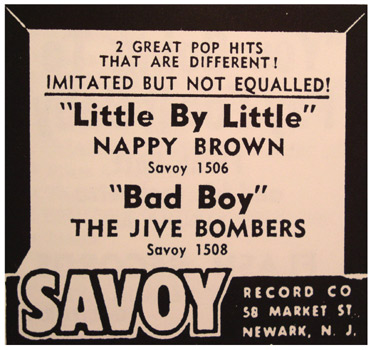 These are the Sparrows along with the Al Sears Orchestra. Clarence Palmer is listed at the bottom of the label on "Brown Boy", and Al Sears and his vocal ensemble is listed on the flip, "Shake Hands." Released on 78 only, in 1949. The promotional copy is shown above. Of note is that Clarence Palmer is shown as the writer, which should belong to Lil Armstrong who recorded the original Brown (Gal) in 1936.

In 1952, Clarence Palmer and the Jive bombers recorded three discs (78's) for Lou Parker's Citation records out of Detroit. This was the second one, and the most important as it related to the eventual hit of "Bad Boy." The original members of the Jive Bombers are listed on the label. Once again Palmer has writing credit, but really just reworked it a bit from the 1936 original Lil Armstrong record.

Although not the first Jive Bombers release (As mentioned above, 1949 as the Sparrows on Coral and 1951 on Citation), this was a very odd release. It is a promo even though the typical Savoy "Sample" is not shown, and was sent out to radio stations to play. There are several interesting things. The title was not "Bad Boy" but rather "Little Bad Boy." Although the Citation release was "Brown Boy", the plan, I believe, was to title this "Bad Boy." Next, you can see in the middle left that the 78RPM release numbers were partially used- 45-1508-78. On the middle right you can see the 6914XX, the XX not used on the normal release. What you can't see are the normal machine stamped numbers in the dead wax along with RVG etched, and most odd was that it was mastered at the wrong speed! It plays at 16RPM. You can imagine that most of the DJ's threw the record away because of the errors. This is one of just a few known copies. Two of the three I know of were found in the greater Detroit area. If you have one, email me the details, including the dead wax numbers. I'd love to hear your story!

Here is the original 78 of the now correctly titled "Bad Boy", playing at the correct speed. A classic song that has been revived in a couple of Hollywood movies. The flip is "When Your Hair Has Turned To Silver." On this release and the one above, the writing credits revert to Lil Armstrong as they should. This was released in 1956.

This is the next attempt at the 45 Promo. This one they did get correct. Notice the song "Bad Boy" shows writing credits to Lil Armstrong.

Here is the stock issue of "Bad Boy." I always have enjoyed the maroon savoy label. Notice that this version has the words "A Hifi Recording" in the upper right, instead of over the title of the song. This is the only Jive Bombers release I have like it. The lettering is also smaller.

This is the most common original version of "Bad Boy" with Hi Fi in the middle left section above the title.

Finally, an early 60's legitimate issue of Bad Boy on the dark blue Savoy label. The printing is larger but the information stays basically the same. Savoy actually issued a bunch of their back catalog in the early 60's.

78's and 45's were instantly pressed for the jive Bombers next release, based on the huge sales of "Bad Boy." The follow up was the Clarence Palmer led "If I Had A Talking Picture." A nice mid tempo recording that differed a little in the vocal delivery of "Bad Boy", but had a similar group sound to it. The flip was led by Pee Wee Tinney and was the up tempo"The Blues Don't Mean A Thing." This was issued in 1957.

The 45 RPM promo issue of the same record. Southern Music is credited on the "B" side of the 45, but not the 78. BMI appears to be dropped as well. Joe "Lucky" Carle was a DJ on the east coast and had a hand in the career of Jack Scott.

The stock copy with the usual Savoy colors to easily identify the powerhouse label of the time. I like the phrase "A Hi Fi Recording" that is placed over the title of the records.

On their third release, and second for 1957, the Jive Bombers went back to the formula that gave them their earlier hit. It is now Clarence "Bad Boy" Palmer on both sides of the record. "Cherry" is the A side and is quite enjoyable. "You Took My Love" was an up tempo effort for the flip. Another decent pairing for the group. The 78 RPM is shown.

Here is the promotional issue of "Cherry" and "You Took My Love." According to the scribble, either someone was trying out their pen, or the DJ intended to play the "You Took My Love" side.

On to 1958 and the promo copy of "Is This The End." Another ballad on the plug side, and another effort using the same vocal tricks by Palmer. A fair song at best. "Just Around The Corner" was the up tempo flip which was now a pattern for the group.

The stock maroon copy on Savoy is shown. This is the second and last issue that lists Clarence Bad Boy Palmer on the label.

On their last release for Savoy, they chose the old standard "Stardust", and a nice delivery is presented by Clarence Palmer. This was recorded in 1959, and was a great choice to release. "You Give Your Love To Me" broke the previously established pattern and is a fair ballad for the flip. Notice Palmer is not given label credit on this release. The promo is shown above.

This is the stock release for the Jive Bombers last record for Savoy. If you are a fan of the group, then you have to enjoy the style they had and their treatment to the old standards.

About five years after the Jive Bombers last release for Savoy, they cut a single for the Middle Tone label from New York. The "A" side shown above is "Anytime (Is The Right Time)" and is a mediocre rock and roll record. On the flip is "Days Of Wine And Roses", which is more like what I would expect to hear from the group. This 45 was issued in 1964, so the competition for rock and roll was stiff. They might have had better luck plugging the ballad on the flip, to easy listening stations 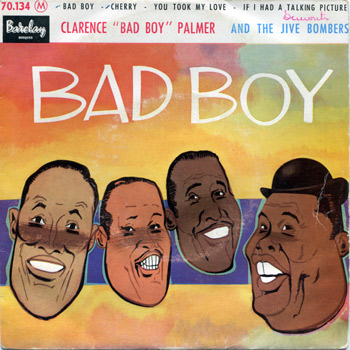 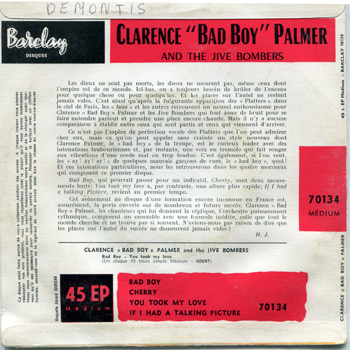 These next two records are way too cool. From France, above is the first of two EP's that were issued on the French label called Barclay. This EP has the "A" sides of the first three Jive Bombers releases, and the 3rd "B" side. The picture on the cover is worth the price of admission alone.

Here are the record labels for the EP. Barclay picked up on "Clarence Bad Boy Palmer" and added it to the labels. 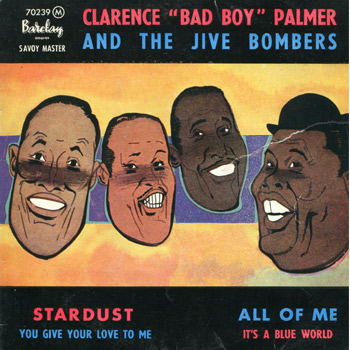 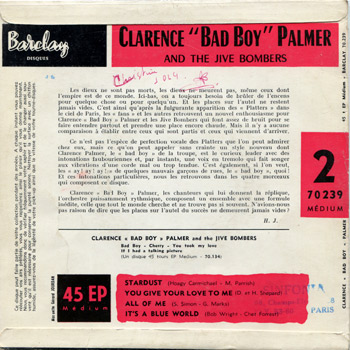 The second EP included both sides of the last Savoy 45, and two others for a total of four. The cover is almost the same. Using the native language, the Jive Bombers are now "Les Jive Bombers."

The labels are about the same as the first EP labels. Savoy is also given due credit on both of the Barclay labels.