Colorradio.com - Fireflies/Richie Adams
Must Have Javascript on
For The Slideshow To Work 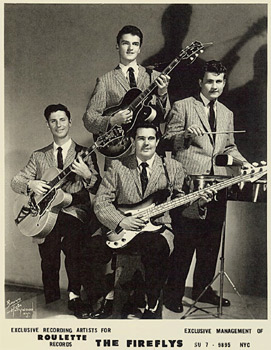 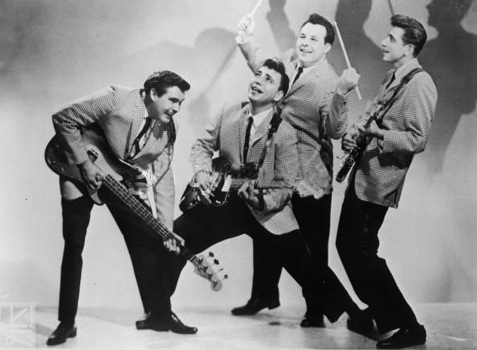 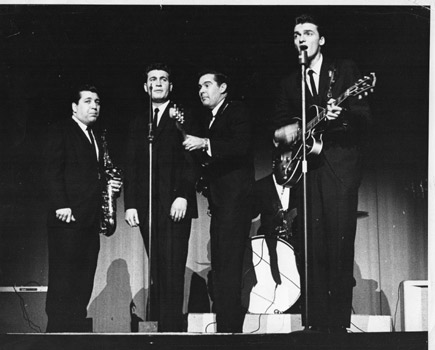 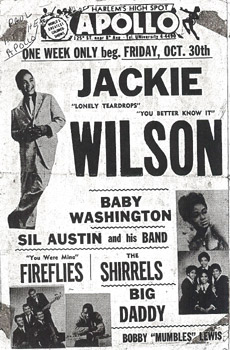 The first release by the Fireflys group, but note the slightly different spelling. "The Crawl" is the plug side and is an instrumental, with some singing. "Where The Candelights Glow" is the flip. Released in 1958 on the Roulette label, these bear no resemblance to the harmonizing that occurred on the next releases by the Fireflies.

Entering the charts in September of 1959, "You Were Mine" was a huge hit. It came out on at least four different colored labels, with various printing styles. Written by Paul Giacalone, it peaked at number 21 on the Billboard charts, and lasted for an impressive 16 weeks. "Stella Got A Fella" was the enjoyable up tempo flip. The pink label is shown above.

Here is a red label issue of the hit. There was supposedly another red label that was earlier than the pink label shown above. It was darker and had lines.

A later orange label pressing that uses smaller print for the title and group name. All the information remains the same. Ritchie Adams was on lead vocals, and had partial writing credit on the flip.

Yet another variation of the orange label with larger writing. Ribbon was a record label out of New York, owned by Alan Kallman. I have never seen a true promotional copy of this record. The closest I have seen has a sticker on it, usually from a distributor who is asking for plays.

And the light blue variation. I have seen this one the least out of all colors I own. This label mirrors the style and look of the pink label the most.
From Spring 2002 at the Red, White, and Rock show in Pittsburgh, PA, here I am with the Fireflies. I am standing in the back, to the right, and then from right to left, Vic Puma, Fred Simmons, Marco Gueli Jr., original member Paul Giacalone, and unknown. My one unknown member was replaced by Bobby Villano in 2003. 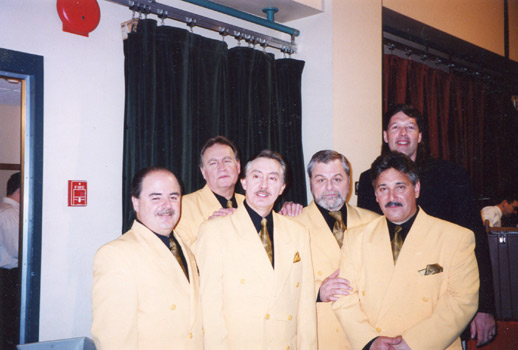 The Fireflies followed up their smash hit with another harmony gem and "I Can't Say Goodbye." Though it only reached number 90 on the charts and hung out for three weeks, it was a fine record that should have done better than it did. Ritchie Adams again on vocals."What Did I Do Wrong" was a decent flip. This entered the Billboard Pop charts in January of 1960, though the record was released in November. The promo is shown above.

Here is the stock copy. Interesting on this 45, both sides received a good amount of play on many stations, but generally, they were different stations. California and Pennsylvania were major markets and helped sell records from the exposure they provided. It started to appear on the individual radio station charts in November of 1959.

Taking a quick side trip, but staying in chronological order. This is Lee And The Sounds from 1959. This group included Lee Reynolds of the Fireflies, along with Gerry Granahan and Vinnie Rodgers. "What Is This Thing Called Love" backed with a dandy called "Beautiful Romance." Great harmonies at no extra charge.

The Fireflies third release on the Ribbon label did not chart nationally. "My Girl", not the Temptations song, but a different song penned by P Granahan was the "A" side. On the flip, "Because Of My Pride", was another ballad that made a good pairing. The promotional copy is shown, and was released in March of 1960.

This is the regular stock issue of "Because Of My Pride." This was to be the Fireflies last record for the Ribbon label, though Ritchie Adams would record two as a solo artist for the label.

The first of two records on the Ribbon label for Ritchie Adams, "Lonely One" was the plug side. It is a mid tempo commercial pop side that is pretty good. On the flip, "Tell Me Baby Did You Wait" is up tempo and asks the question of his girlfriend, hoping the answer is yes.

This is actually the second and final release by Ritchie Adams for Ribbon. "Back To School" is an up tempo fun song and was recorded in late 1960. How he could remember all the names of the girls in a string that gets sung out TWICE, is beyond me! The flip side ballad "Don't Go My Love Don't Go" sounded like something the Fireflies would record, but the same female singers used on the "A" side help on this one.

"Marianne" was the last ballad by this incarnation of the Fireflies, recorded for the Canadian American label in 1961. The "B" side is another ballad, "Give All Your Love To Me." The promotional copy is shown.
c

Here is the regular black stock copy on Canadian American.

This is the first release for Ritchie Adams on the Beltone label. In just 6 issues, Beltone would have a huge hit with the Jive Five and "My True Story." "No Mistaken It" looks like the plug side, though the matrix numbers would not agree. "The Right Away" was the flip. The title should have been The Right Way, based on the lyrics. Had that been the "A" side, they would have needed to re-press it with the correct title. Partial song writing credit for Adams is shown on both sides. King records also shows a distribution arrangement as well.

The second and final issue for Beltone in 1961, "Two Initials (In A Heart)" is the type of record that should have caught on. "What Took You So Long" is on the flip, and is a popish ballad. Joe Rene and his orchestra is again shown with label credit, and he was the label owner. Beltone had some 40 odd releases in the early 1960's.

Ritchie Adams cruised over to the powerhouse Imperial label for three more records in 1962. "I Got Eyes" featured a group in the background, and is a fun mid-tempo outing. For the flip, "Something Inside Of Me Died" was chosen, and is a nice record. Ritchie Adams got half the writing credits on this one. Both sides were well produced and had a big sound that Imperial was capable of.

Still in 1962, "Pakistan" is a great record with an intriguing, exotic sound, and a happy ending! A great story record that takes you out of the country for 2:36. "My Prayer Of Love" is a nice ballad for the flip. Ritchie Adams went on to the Congress label for five issues around 1964, and a few other records on various other labels.

The Fireflies broke up/reformed with Lee Reynolds staying, and adding Richie Spero, Frank Piazza, and Bobby Saranievo. They recorded for Taurus, and this is the first of four 45's and one LP they recorded. The first order of business was to re-record You Were Mine as "You Were Mine (For Awhile)." The finished product was a 1:20 short answer song of sorts, that was similar to the original in style. "One O Clock Twist" is more instrumental than vocal record. Released in 1962.

"My Prayer For You" was next in line for Taurus, and the year was 1964. It is a mid tempo group record that is pleasing. The "B" side, "Good Friends", is a bit weak, and to my ears is a bit more in the style of the British invasion. It may have been the "A" side, as it was included on the LP shown at the end of this page.

From two years later, 1966, "Runaround" is not the same song as the Regents sang in 1961. It is an original rock and roll song, staying with their sound style of Good Friends. The flip is "Could You Mean More."

Lastly for Taurus, and for the Fireflies, "Tonight" is from 1968, and again, they continue in the same style with another decent effort. "A Time For Us" is a forgettable flip. Nothing wrong with the performance, but just not my style. It was from the movie Romeo and Juliet.

I had to add this remake of "You Were Mine" by Ritchie Adams, just for reference. It is a respectable effort, and was released in 1966. A pop version with a female group, it did not chart, and may have been the "B" side to "Better Off Without You." Better Off Without You is a typical record you might hear in 1966, but is really quite good. Notice the involvement of Teddy Randazzo on both sides. The promo is shown above. 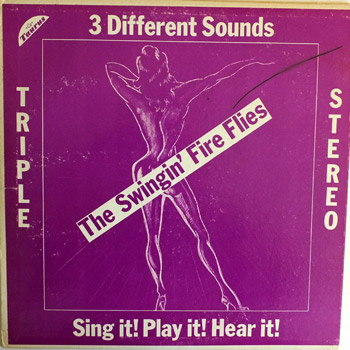 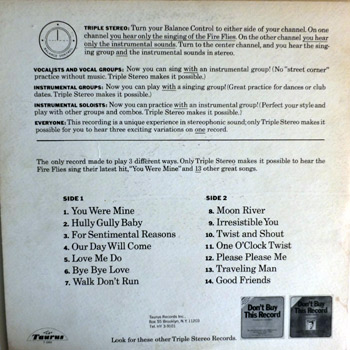 The "Taurus" Fireflies released an album of their recordings on the Taurus label. It was pressed in two versions: Mono, and as shown above, in stereo. Make that Triple Stereo! What is triple stereo, you ask? Turn your balance control to one side and you hear the music only. Crank it over to the other side and you have just the Fireflies singing. Put it in the middle, and you have the record sound as intended with both the music and singing. That was triple stereo, according to the liner notes on the back of the album cover. The LP had 14 cuts, three of which were on 45's, and the rest were other artists hits of the early 1960's.

Here are both labels for the Stereo Lp. The label looks just like the earlier 45RPM labels.
Updates: The Fireflies will always be remembered for You Were Mine and true oldies stations still play it, but they did have other records along with a great sound and following. Ritchie Adams put out some great records as a single artist, but never made the national charts. Too bad, because several of his songs should have.

Where are the now? Paul Giacalone passed away in 2013. Currently, you can still view the Fireflies website for more information about the group.