Colorradio.com - Hugh Barrett/Victors
Must Have Javascript on
For The Slideshow To Work

There was a fungus among us,...which one was the fungus? So go part of the lyrics of the song recorded by Hugh Barrett and the Victors. I'll set the "record" straight: The original recording was by Terry Noland in 1958, but this page is about Hugh Barrett and the Victors. The picture below left, identifies each singer in the group, with more pictures to follow. Bobby Angel sang and played sax, Richard Mayer sang and sometimes played drums or bongos, Chuck baker sang and was the go-getter for the group, using his contacts and newspaper job to get the group exposure. The group was formed in 1958, based in Chicago, and as most groups do, they recorded some records and ended up branching out and doing solo work or changing members as they went along. Richard Mayer had always been interested in music. He sang in a Church choir, high school chorus, barbershop quartets - anywhere he could. He was a harmony singer, and most comfortable in that role. He met Chuck Baker who was a guitar player and lead singer extraordinaire and they added Bobby Angel. Session producer Vic Farachi came up with the name (Victors), likely based on his first name. The Victors sang where they could, and enjoyed the attention, especially from the girls.Listen to my interview with Richard Mayer Here!
Based on the newest addition to local WLS radio, Dick Biondi, the newly formatted rock and roll station station soared in the ratings, and was fortunate to be a high power, left-on-the-dial signal blaster for the Midwest and beyond. It was May 1961 and WLS changed the way Chicago listened to radio. In that same year, Biondi became enamored with Terry Noland's now 3 year old Fungus song, and decided to get a new recording together. It was based on his current saying that was tearing through Chicago, that there was A fungus among us. Enter the Victors, Hugh Barrett, Debbie and Sandy, and the musicians. They were hired to record the platter for the local Madison label. They waxed it, and the Dick Biondi promotion machine began. The record made a huge impact on the Chicago airwaves, and sold very well locally. Biondi had so much fun that he started issuing "Fungus license cards" and you could be an honorary fungus. He even had some listeners send him different species of fungus. 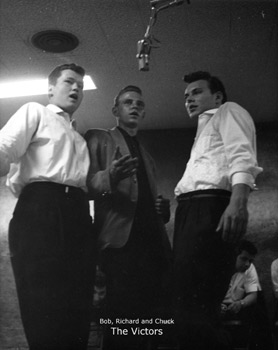 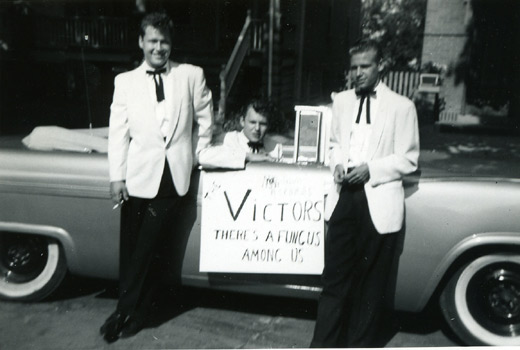 On the picture to the left, standing left to right, Bobby Angel, Richard Mayer, Chuck Baker. The picture on the right is from a parade in Chicago on Milwaukee Avenue, and that is Richard Mayer's 1956 Pontiac. 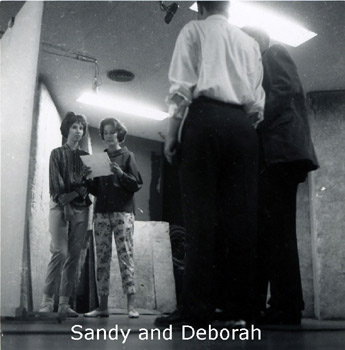 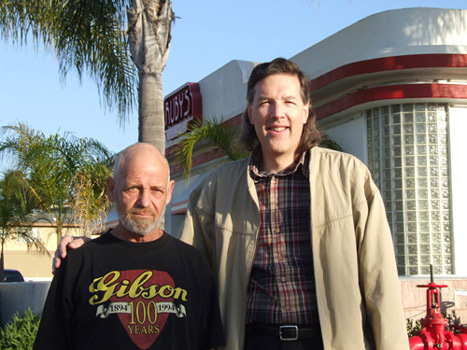 If you have heard the song "Fungus Among Us", you can't help but notice that it is a real group effort. Part of that effort is supplied by Sandy and Debbie shown above in the recording studio, above left. They are reading their parts and practicing the song. Just them singing "Which One Is The Fungus" is enough to make you smile, and then wonder who it is! Many of the pictures on this page were taken by Chuck Baker. On the right is Richard Mayer and myself, Brian Lee, from April of 2011.

Here is the local hit record of There Was A Fungus Among Us for the Madison label. No writing credit is given to Terry Noland who penned and recorded the original in 1958. It was recorded at Nero Recording Studios 50 E. Oak street, in Chicago. It took several hours and a total of 26 takes. What you hear is actually part of the 1st take and the 26th take, spliced together. The flip is a great rockabilly record called "Got The Bull By The Horns." According to Richard Mayer, he and the Victors were not on the record, though the label gives them credit. It was most likely Hugh Barrett and the original band only. Members of that band are sketchy, but did include "Frankie" on guitar. At least that is what his Guitar had written on it. Madison records had just four more releases and they went out of business, thus the follow-ups on the Lucky Four label for the Victors and Hugh Barrett. Madison released almost 70 records in total for the label. 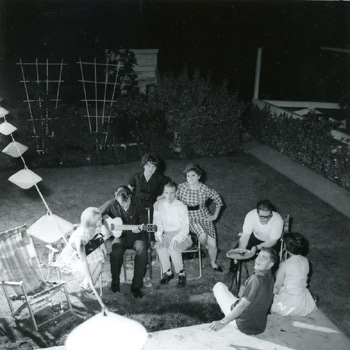 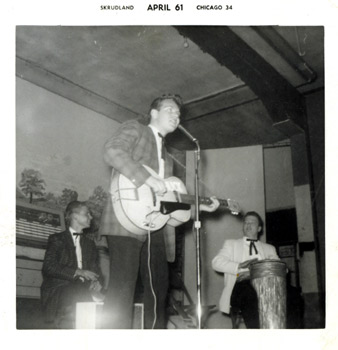 To the left is what Richard Mayer calls a "Fungus Party." A rehearsal with some of the players, and a few friends. Chuck Baker has the guitar, Richard Mayer is sitting to his left, Sandy and then Debra are behind Richard, the large guy is Paul Segal, who went to High School with Chuck Baker. He sang occasionally with the group, but was not on the record.. The location was most likely in Wisconsin Hall Of Fame DJ Marty Green's back yard. On the right is a pre-fungus picture of the Victors performing at a Church sock hop, in April of 1961. The Fourth Congregational Church in the Logan square area of Chicago was the location. Richard Mayer is on the left with the bongo, Chuck Baker is singing and playing the guitar, and Bobby Angel is seated to the right on the conga drum.

A follow up to Fungus Among Us, it did not sell well. However, "Lovin At The Drive In" was reviewed by Billboard and given three stars! It was listed under the "Moderate Sales Potential" section of the September 18, 1961 issue.

From 1966, this is the demo disc/custom press of the 1966 recording of "Another Lonely Soldier Boy" backed with "Moonlight Down By The River." This is actually the test press that was issued by RCA, and it listed Magic Touch Records. It was commercially released on the Dynamic Sound label (Wisconsin), which was a division of Magic Touch. The Dynamic Sound discs also were pressed by RCA.

From 1966, this is the actual release of "Another Lonely Soldier Boy" backed with "Moonlight Down By The River." The "A" side is a nice ballad, probably should have had a bit more radio exposure than it did, but it was doo wop / vocal group sounding, and not what you were hearing in 1966. Above is definitly a promo. It has DJ by the record number at the middle left, and shows "Plug Side" on the right, above the double lines. Dynamic Sound released at least eleven records on the label, most from 1966-1967, the last two from 1979. Some of the artists were local to Wisconsin. 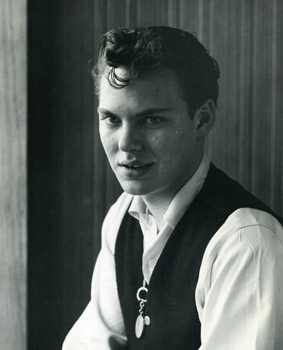 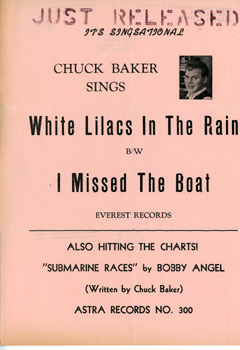 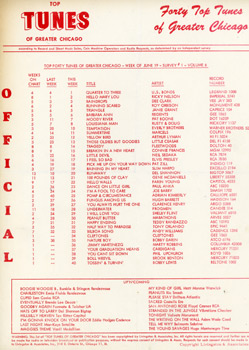 On the left is now former Victor Chuck Baker. Richard Mayer mentions that he was the most talented guy in their group, and he went on to wax a record for the Everest label in 1962. Billboard had a small article mentioning that "Bernie Solomon had signed singer-promoter Chuck Baker to Everest records. Baker's first release due the middle of the month (April 1962), will be "Lilacs In The Rain." The song "I Missed The Boat" was on the flip. One of his promoting gimmicks was to send Chicago area DJ's the record along with some white lilacs. Of course it was raining and snowing at the time...... Other interesting notes are promoting him in 1962 as he was performing at "Dan's Old House" on Mannheim Road, and apparently writing for Vee Jay as well as mentioning his new group at the time, the C Notes. "Lilacs In The Rain" was a regional hit in the south.

At the bottom of the advertisement on the above center, the promotion of Bobby Angel (Schimmel) and a semi instrumental called Submarine races .It was a 1962 recording for the Hillside IL. based Astra label, not to be confused with the PA label of the same name. This label had at least 6 issues by 6 different artists. The record capitalizes on the then popular activity of going to your local lake,river, or mammoth body of water, and looking for surfacing submarines with your latest girlfriend.

Mentioned above, this is a promotional issue of the Chuck Baker single on Everest. "Lilacs In The Rain" was the plug side. Everest records was based in New York and Los Angeles, and had a healthy catalog of releases, covering an ompressive amount of styles and artists. "I Missed The Boat" was on the flip.

The record previously mentioned in the advertisement lists the artist as Bobby Angel and The Hillsiders, taken I'm sure, from the city the record label shows near the bottom. The flip is an instrumental version of Heartbreak Hotel. 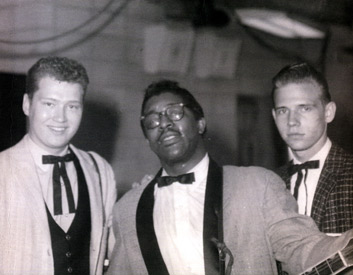 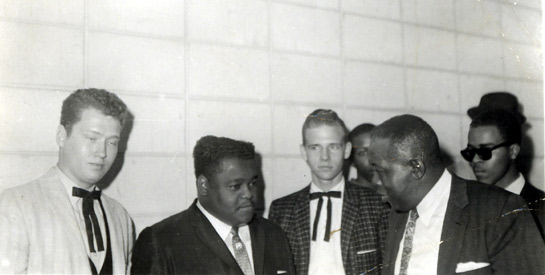 Here are pictures of the Victors with the stars! Left picture: Bobby Angel on the left, Bo Diddley and then Richard Mayer. Bobby Angel, Fats Domino And Richard Mayer are in the picture to the right. Others are not known, at least at the moment. This was from a local show in the Chicago area.

Updates: The Victors recorded additional songs with Hugh Barrett, and the Victors made some demos and performed some as the Trav-A-Leers. Richard Mayer recorded on the follow-up recording by Hugh Barrett/Victors for the Lucky Four label called Devil's Love, backed with Send For Me. Another demo was Laural Sue and listed the group as Chuck Baker and the Trav-A-Leers. Other Hugh Barrett recordings do not have personnel documented at this time. In September 2010, I had the chance to Interview Richard Mayer of the Victors, and you can listen HERE! A couple of clarifications on the interview: When Richard went into the bar, The girl who greeted him with a kiss said, "Come on back here with me, and I'll buy you a drink." Second, he never saw her again but heard Larry Dale on his return to the bar.

Chuck Baker worked for Capitol records after the war, in Chicago as a junior promotion man, then to Los Angeles working for Capitol Record Club and compilation LP's. He also wrote and produced singles under his name and one with the group Undisputed Truth. He is now a journalist/writer and founded Veterans Reporter News. He also has a radio show on KLAV AM in Nevada. Additional thoughts from Chuck Baker here.

My thanks to Richard Mayer, for without his story and documentation, this page would not be possible. Hugh Barrett has passed away. Richard Mayer is in Southern California, Chuck Baker is also around, but the rest of the guys whereabouts are unknown. Bobby Angel, Debbie And Sandy, where are you? Love to have you check in!