Colorradio.com - Celebrities
Must Have Javascript on
For The Slideshow To Work 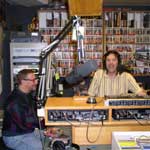 Some of the artists on my pages I have had the opportunity to meet in person.  Many I met at a three day show in Pittsburgh.  Red White And Rock was one of the great shows that TJ Lubinsky put on to raise funds for public television. Some I brought to a concert in Grass Valley California at the Nevada County Fair .  Others, I have run into by various means.  These are some of the people that were part of music history in the 1950’s and early 1960’s.  Back then, radio was much more regional, and there was no internet. News traveled slower, and music was more alive. A star in one town, might not be known in the next state over, but it didn’t matter.  They were all living their dream.