Colorradio.com - The Hunters IV
Must Have Javascript on
For The Slideshow To Work 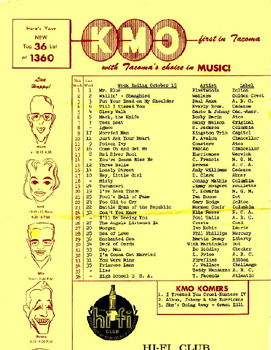 The Hunter's IV started off doing what all vocal groups from the 1950's wanted to do. They sang in front of audiences, they cut a record, it got on the local charts, and heard it played on those hometown radio stations. In the photo below, left, the Hunter's IV are Bill Clark, sisters Jan Marquis, Betty Marquis, and Dwight Hunter. Rob O' Conner was the original Rhythm/bass guitarist and Bill Clark replaced him after Rob joined the service. The group was based in Corvallis, Oregon, and led by the group's namesake, Dwight Hunter. They were originally called the Silvertones, but that presented a conflict with the fine folks at Sears. Since Dwight formed the group, the Hunter's IV name was applied. After Dwight, Jan and Rob graduated from Corvallis High School, they found themselves working for Buck Owens in Tacoma. Owens had a steady gig in town, and Dwight convinced him to let the Hunter's IV play during intermission. Dwight was working in the area at the time, but the other three members would drive up every weekend so they could sing. Buck Owens wanted to record them, but deferred to Jim Owens, who owned a record store called the Record Bar in Tacoma. Surprisingly, he was no relation to Buck Owens. Jim Owens liked what he heard and signed the group to a recording contract. They went into the Joe Boles studio in Seattle, and spent all day recording their two sides. The record was intended to be issued on the bar label - for Jim Owens store called the Record Bar. The disc was sent to radio stations up and down the west coast. They received airplay and chart action in the northwest as well as some spins in Los Angeles with Art Laboe at KPOP and Bill Balance at KFWB. Listen to an interview with Dwight Hunter of the Hunter's IV HERE! It was recorded in the summer of 2006 and was a lot of fun. 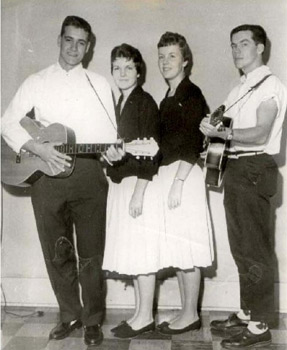 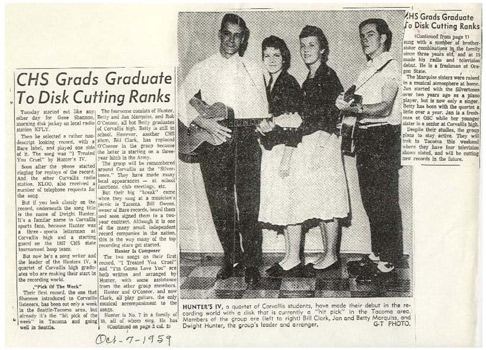 On the above, right, this is a newspaper clipping from October of 1959. It mentions that it the record is just hitting the charts in several cities in Washington. It also states that they were to appear on some local television shows and hoped to cut some additional records. Click on the article for an enlarged picture.

Here is the original release of "I Treated You Cruel" on the Bare label. The label was supposed to read "Bar" for the establishment that Jim Owens had, called the Record Bar. The additional "E" was added by mistake, and made for an unusual label name in 1959. I don't believe there was any promotional copies pressed, so they are likely all stock issues as shown above. The flip is "I'm Gonna Lova You." The song is often referred to as Who Could Ask For Anything More, since the phrase is repeated several times in the lyrics. There was already a song with that title, so their title was changed. Both sides were written by Dwight and arranged collectively by the group. As previously mentioned, they were recorded at the John Bol studios in Seattle. That was the same place that the Wailers, Ventures, Fleetwoods, and a load of other northwestern bands recorded their hits. Their session took all day to finish, and the Hunter's IV were recipients of some additional guitar and drum overdubs before the disc was finished.

In this picture to the right, going clockwise, Bill Clark is on the extreme left, Dwight Hunter, Betty Marquis and Jan Marquis on the bottom. 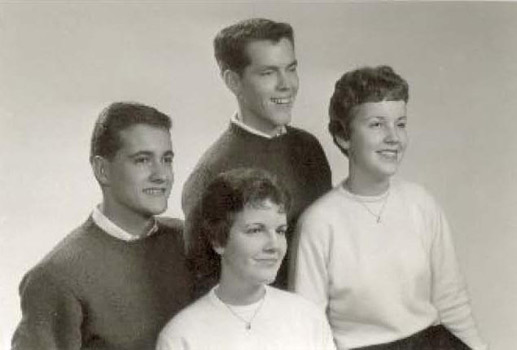 Updates: The record was apparently sold to the Josie label which was under the Jubilee umbrella. Josie 874 was released early in 1960,which makes sense. The decision would have been based on the regional action in the northwest, and some airplay in Los Angeles, as well as other cities in between. The record didn't hang around the charts too long in 1959/1960, but the experience and memories continue to this day. My special thanks to Dwight Hunter for making this page possible.

Where are they now? Dwight Hunter has a very successful computer consulting business in Tracy, California, and still sings whenever he can. Jan Marquis is still living in Oregon and works in the Environmental consulting field. Betty Marquis is in business, also in Oregon. Original member Rob O'Connor has retired from teaching school in Eugene, Oregon, and the whereabouts of Bill Clark is unknown.

Gone Missing: The Josie label issue from early 1960 would be the only record missing. I have never seen it.