Colorradio.com - The Five Stars
Must Have Javascript on
For The Slideshow To Work 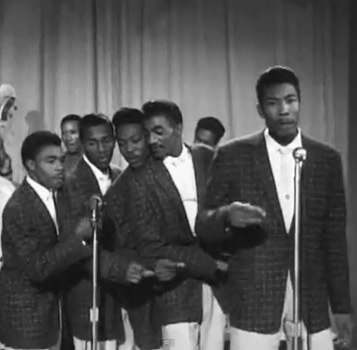 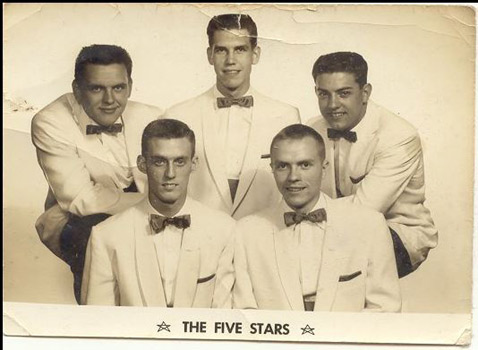 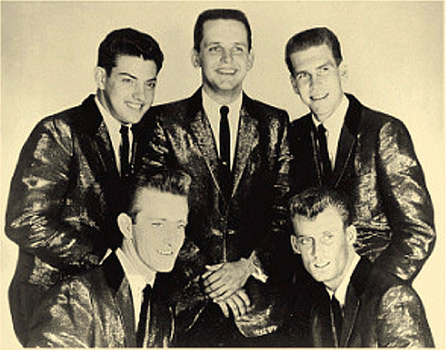 From Los Angeles, here is the second record on the Showtime label. It happens to be the Five Stars, with the bluesy sounding "Walkin And Talkin" backed with "Where Did Caledonia Go." The "A" side featured Walter Robinson, and on the flip was Jimmy Huff on lead, a former member of the Imperial label recording group Three Dots and a Dash. An ode to Louis Jordan's song from the mid 1940's, it was probably a bit late in that regard, but a fun up tempo number to be sure. Other members of the Five Stars may have included members of the Feathers, also from the Showtime label.

The next group of Five Stars hailed from Detroit. Members included Joseph Murphy, John Raymond Dorsey, Walter Gaines, C.P. Spencer, and Henry Jones. Their first record was on the New York based Mark X label, which was associated with George Goldner. "Ooh Shucks" and "Dead Wrong" were issued in 1957 on 45 as shown, and also on a 78. This group had a couple members that started out with the Thrillers, then they became the Five Jets. After the Five Stars, they were the Voice Masters on the Anna label. The lead on this recording loved to roll his "R's", and both sides are decent. Also of note is that both sides were written by Berry Gordy and T-Carlo (Billy Davis) which is certainly some of their earliest works.

Next up for this Five Stars group was "Blabbermouth" on a major label, End records. The doo wop tinged flip was "Baby Baby",and was pressed in 1958. End was the first label for this record. Blabber Mouth is a novelty, and is pretty funny. It's reminiscent of the Coasters records and includes some unusual instrumentation.

Strangely enough, three years later in 1961, Columbia released the 45 with both sides in tact. Maybe they thought that the record would get played with some of the other novelty records of the time.

Columbia pressed up Compact 33's of the record at the same time the regular 45 issue was available. Maybe some of these went to jukebox owners? It was not an unheard of format with record labels. At the time RCA issued a bunch for Elvis and one for Mickey And Sylvia. Columbia did them for other popular artists including Buzz Clifford.

From the Indianapolis Indiana area, this group of Five Stars had several records on different labels. They had a great sound, though not huge hit makers. The Five Stars consisted of Jim Bruhn, Bill Campbell, Larry Hoffman, Bruce Miller and Ron Russell. Their first record was on the Kentucky based Kernal label. Issued in 1957, this recording featured the Boyd Bennett band backing the group. Using a somewhat popular theme at the time, "Atom Bomb Baby" is the plug side., A mid tempo group effort on the flip, "You Sweet Little Thing" is also a nice recording. Listen to my interview with Bill Campbell Here!

The record made enough noise for Dot records to pick it up and distribute for the entire USA. It didn't meet the expectations of Dot, but it certainly got the Five Stars name in circulation.

The next sequential release on the Kernal label was Dottie Fergerson backed with the Five Stars. "Slow Burn" made enough local noise that Mercury actually picked it up for their label. On the flip was "You And Me And Love." Dottie Fergerson went on to have a couple additional issues for Mercury. These sides were cut at the same session as the previous Five Stars release on Kernal.

The next Five Stars release was on the Indianapolis label called Note. "Pickin On The Wrong Chicken" was the "A" side and was getting the play at local radio stations. Released in March of 1958, it never made any national charts, but certainly scored high on the local and regional sheets. It garnered enough local spins to get Hunt records interested in distributing it. Hunt was successful with a few other records including the Quintones and the Virtues. Dick Clark was also associated with the label for a time. "Dreaming" is an excellent ballad on the flip side. This record is a great two sider. Personnel that were also on these recordings included Ronnie Haig, Jimmy Coe and Wes Montgomery. This is the same Five Stars as on the Kernal label.

As mentioned, here is the Hunt label issue of the Five Stars record. Shown above is the promotional copy. The label colors are all the same as the stock release, with just the promotional lettering added. The story I have heard is that the manager for the Five Stars started asking for too much money for appearances, and the record started to drop from sight. This was also issued on the ABC label, though I have not seen a copy.

The stock copy is shown above. I just love both sides. Dreamin is just a haunting, slow riveting ballad, and I can listen to it anytime. They sold a lot of copies of this record, but it just didn't break into the top 100.

Sparton released several 78's of records that were pressed on the Hunt label. Here is the Five Stars on a 78, and most all of the information is the same as the 45 RPM below.
c

The 45 is a typical release for Sparton. ABC is listed at the bottom, though I have only seen the USA Hunt label.

The follow-up for the Five Stars was pressed on the Note label only, and was released in early summer of 1958. "My Paradise" got the nod, while the up tempo"Friction" was on the "B" side. "My Paradise" had all the elements to become a hit, except for sales, and is a great side.

The Five Stars last release for the Note Label, and that I know of for the group, was called "Am I Wasting My Time" backed with "Gambling Man." The "A" side still had a great group sound to it, but was more of a pop sounding effort. "Gambling Man" reminds me of an early folk rock record. This appears to have been issued in early 1959. Jimmy Coe and Earl "Fox" Walker were likely on this session.

To Dallas we go, with another iteration of the Five Stars. This group was reportedly from the Milwaukee area, but met up and originated in Dallas. One record was issued on the Blues Boy Kingdom label in 1957. The group consisted of Cal Valentine, Robert Valentine, Al "TNT" Braggs, Billy Fred Thomas, and Jesse Floyd. Early copies showed the artist as Millard Lee, before it was changed to the Five Stars. "So Lonely Baby" backed with "Hey Juanita" proved to be a good, bluesy two sided winner.
The Five Stars were featured in the 1957 movie "Rock Baby Rock It." The film appears to have been shot in the Dallas area at the time, which makes sense based on some of the artists involved. Shown above is a reproduction of the original record. To the right is a video clip of the Five Stars from the movie. Clips like this are few and far between. Some of the best examples come from many of the low and medium budget rock and roll movies of the 50's and early 60's.

Another Five Stars group. This one from the Bedford-Stuyvesant section of Brooklyn New York. The group was really the Inspirators that recorded for Treat and Old Town, and for some unexplained reason, Treat records released this 45 as by the Five Stars. It was issued in 1955, but didn't do much of anything in the way of record sales. The group consisted of Cleo Perry, William Massey, Clifton Johnson, Barry Fields, and Buster Boyce. "Let's Fall In Love" was backed with "We Danced In The Moonlight." The latter is a great sounding ballad that deserved more spins than it received. The above record is one of the few reproductions on my pages.

Issued in 1971, this is Norm Burns and the Five Stars. Released on Sterling records out of the Boston area, it was one of many for Norm Burns on the label.

This is a gospel group called the Five Stars Of Baltimore, MD. The release date was 1972. "All Be Over" backed with the uptempo "I'm Looking For Jesus" is a nice pairing. One original member of this group is Patricia Denny Eames. She also mentioned" I recorded with this group here in Baltimore MD. However, there was an album titled I'm looking for Jesus. Other songs on the album include It's Getting Late In the Evening and Jesus.
Updates:There were many Five Stars groups that recorded in the 1950's. I'm sure there were a few that were earlier, and some in the later 1960's as well. Most discographers have the groups sorted incorrectly, and this page should set the the information straight.