Colorradio.com - Marvin Brown/4 Dots
Must Have Javascript on
For The Slideshow To Work
They Started as the Mellows around 1950, in the Hill and Homewood sections of Pittsburgh, PA. The original group did not have Marvin Brown included in it......because they hadn't found him yet. When they did, it was Fletcher Williams, Edgar Lee, Melvin Peters, Kenneth Miller and Marvin. They changed their name to the five Mellows, and sang much of the standard fare of the R+B groups in the early and mid 50's. They changed their name again,this time to the Four Dots, Edgar Lee left(and some additional swapping of members), and had one recording session in early 1956 with Bullseye records. They recorded four songs,"Rita","He Man Looking For A She Girl","Peace Of Mind","Kiss Me Sugar Plum." The first two were released as Bullseye 103. It was played locally in the Pittsburgh area, but didn't get play nationally. The second release pair the last two, Peace Of Mind", and "Kiss Me Sugar Plum." Same result. The story has some twists. A different group from California, called the Four Dots, was signed to a Liberty records subsidiary, Freedom, in 1959. This group had Jewel Akens, Jerry Stone and Eddie Cochran as members, and released two 45's. That label also signed the Marvin Brown based Four Dots. You can't have two of the same named artists on a label, so the "Original Four Dots" became the Four Troys. They issued "In The Moonlight" and "Suddenly You Want To Dance" on Freedom 44013 in 1959. Today, the Four Dots are Nate Benson, Fletcher Williams, Aubry Kirkland, and Marvin Brown. And, I understand they added "Pleading For Your Love", by the California based Four Dots, to THEIR musical repertoire! Melvin Peters is alive and well residing in Cleveland, Ohio. He performs in the Cleveland area and is greatly appreciated anywhere he performs. 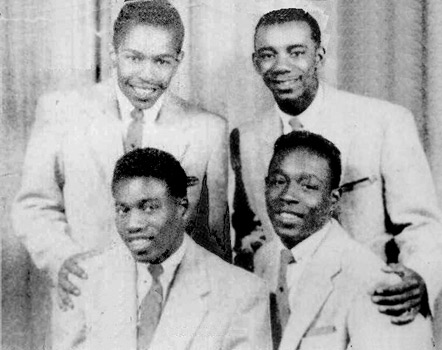 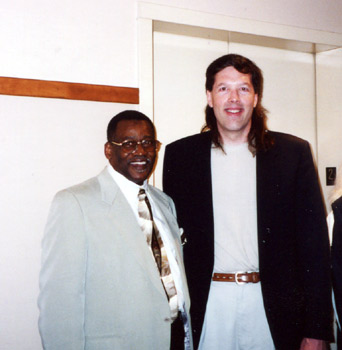 Above on the right is myself along with Marvin Brown from the original Pittsburgh vocal group, the Four Dots. This was taken in May 2002 backstage of Red, White and Rock. Above left are the Four Dots - Clockwise from the upper left Kenny Miller, Melvin Peters, Fletcher Williams, and Marvin Brown.

The first release by the Four dots was on Bullseye records. "Rita" backed with "He Man Looking For A She Girl." I know the flip had play in Pittsburgh, I suspect both sides did. A great ballad/uptempo combination for the group. Fletcher Williams is listed as the featured singer at the bottom of the label.