Colorradio.com - The Chords
Must Have Javascript on
For The Slideshow To Work 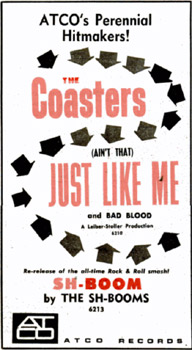 The Chords are best know for one single record -  Sh-Boom.  It was a huge hit for the group, and they  were the first  R+B group of the  1950's to  hit the  pop charts. The   Chords were  originally from  the south Bronx  and started singing in 1951. The group   consisted entirely  of members that broke off from other groups. Second tenor Floyd  McRae and bass Ricky  Edwards both  came from the Keynotes, Ricky Edwards also belonged to the original Chords - first tenor Jimmy Keyes came from the four Notes, First Tenor Carl Feaster and brother Claude (Baritone) of the Tunetoppers. Their big hit was supposedly written in 1953, and then put on disc in April of 1954. Sh-Boom was partly slang  and somewhat influenced by "The Bomb." The Chords ended up at Atlantic records  where "Cross Over The Bridge" was to be the plug side for it's new subsidiary Cat   records. It was a cover of the Patti Page hit, and perfect for the group. The Chords record was turned over by the DJ's and Sh-Boom was the hit. And then came the twists. The Chords had covered "Cross Over The Bridge" by Patti Page who was on Mercury, so   Mercury immediately released a pop cover version by the Crewcuts. Atlantic records replaced "Cross Over The Bridge" with a Chords penned tune  "Little Maiden." Atlantic owned the publishing, so they didn't have to give it up to someone else. There are two sides  of a record, with publishing, both sides are treated the same in reference to payments. The record went #2 R+B.   After a couple of follow up releases, they hit another snag. There was already a registered  Chords group. They could no longer use the name! This other group had  recorded on Gem records and was legit, but the name association was gone. They tried with  the Chordcats and the Sh-Booms, but to no avail. Some great records, but not enough  buyers. Below is a record label history of the group. For a complete listing of the Cat records label, go HERE! 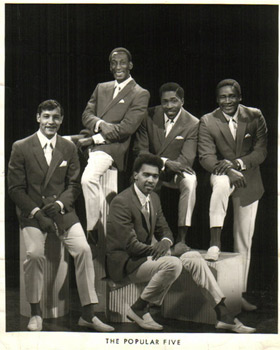 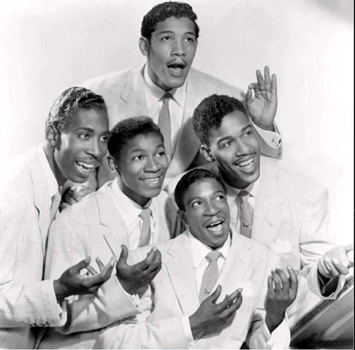 This is the 78 of the first pairing of Chords' sides."Sh-Boom" backed with the original flip "Cross Over The Bridge." Bridge was supposed to be the "A" side and is indicated as such in the dead wax numbers. Many DJ's started flipping, and Sh-Boom became the monster hit. Notice the Dr. Jive sticker on Sh-Boom. He was a legendary DJ in the New York area. This was from April of 1954.

This is the 45 version of the original pairing. Notice that the 45 label is a maroon color compared to the flat black 78's. A very colorful design. This pairing lasted for about 2 months before changes were made. The Chords had the most success of any artist on the Cat label.

Once Sh-Boom became the popular side, Atlantic decided to drop "Cross Over The Bridge" and replaced it with "Little Maiden." The 78 is shown above. Actually, it was Atlantic that wanted more publishing money, and no doubt it helped the DJ's concentrate on Sh-Boom and not flipping the record over. Issued in June of 1954.

With such a big selling record in the US, it was just a matter of time before Canada pressed the record. Quality records had the honors, but just in time to use "Little Maiden" as the flip[. No mention of Cat records, as most International labels gave credit where it was due. This 78 was stamped "Complimentary" and pressed on Metrolite.

The lovely maroon cat label 45 version has the same information as the Cat 78. As for the new "B" side, it was not a particularly good recording. It was a great way to get Sh-Boom played, not that they needed much help by then. This is the most common release of Sh-Boom.

The 45 RPM Canadian disc. They were a shadow label with no actual artists, but followed the trends of the US record buying audience.

Although not the next record issued in the time line of the Chords recording career, this was the result of another Chords group being discovered. That required them to change their name, and they picked the Chordcats. When name change was official, they issued Sh-Boom and Little Maiden using the same label and record number. The name association was a very tough obstacle, so it didn't sell real well.

The maroon cat 45 of the Chordcats is shown above. The label information is identical to the 78. This would have been re-released in September or October of 1954.

The next numbered release was on Cat 109, and was by the Chords, titled "Zippity Zum." Released in September 1954, it has two fine recordings, with "Bless You" on the flip. It was rated high in the reviews (88), but did not compare in volume to Sh-Boom. The 78 is shown above from 1954.

On the 45 RPM version, everything is pretty much the same. The label has the exact information as the 78. The Chords never regained the success of "Sh Boom."By October 6th 1954, this was hot in Los Angeles, shown as a territorial tip from a Billboard R+B survey.

Another Quality issue for Canada. "Zippity Zum" And "Bless You" by the Chords. It had enough spins and potential that they ran a few off on the label.

Staying on Cat 109, but fairly close to the time line, the name is changed to the Chordcats for this 78. Shortly after the original release of Cat 109 by the Chords, the group name controversy occurred, and the Chordcats name was chosen. The record company decided to reissue both of the Chords records on the same label and number, but by the Chordcats. Whew!

From Late 1954, and now doing business "Officially" as the Chordcats, the 78 shown above has "A Girl To Love" as the plug side. "Hold Me Baby" was the flip. This is an unusual promotional copy on an all white label. I figure they needed to send this out to the radio stations to drive home the fact that the name change was in effect.

This is the regular stock copy of Cat 112. We will see the group re-invent their name again later on as as the Sh Booms.

Here's the 45 RPM version of the Cat 112. Both decent songs, and they should have sold better than they did. Besides the name change. their previous record did not sell well, so this was tough to get off the ground.

Cat 117 was released in October of 1955, a rather long wait between the Chords / Chordcats releases for Cat. One reason could be that there was another new name for the Chords/Chordcats - The Sh-Booms. The 78 is shown above. "Could It Be" was the "A" side and "Pretty Wild" was the up tempo"B" side.

The 45 RPM release again used the same information. You can see at the bottom of both the 78 and 45 RPM records, the reference to (Formerly The Chords). Never even a mention of the Chordcats.

Released two years after their previous record, the Sh-Booms issued "LuLu" and "I Don't Want To Set The World On Fire" in September of 1957. They switched record companies to the RCA subsidiary label Vik. The Sh-Booms broke up after this release. Temporarily anyway.

It's March 1959 and the Sh-Booms are back together again...sort of. On this promo Roulette label recording, Carl Feaster and Jimmy Keyes are the two original Chords while Dorian Burton and one other person rounded out the group. Feaster decided on the name Lionel Thorpe, and these two sides were cut. "More, More, More" and "Lover, Lover, Lover" had a somewhat distinctive sound, though much more pop than anything else.

Shown above is the harder to find stock copy. Since Roulette used a largely white label for this issue and most others at the time. just the words disc jockey and not for sale differentiate between the two. Earlier Roulette issues from 1957 and 1958 had many label variations. They included red or orange labels, some with a wheel, and some with stars.

In January of 1960, they issued one more record under the name Lionel Thorpe. "Don't Run Away" backed with "She Was Love." Another pop related record, shown is a stock issue.

Later in 1960, the Chords ended up back at the mother ship, Atlantic records. "Blue Moon" is the plug side of this promotional release. It is a great version, too."Short Skirts" is the flip. And, they were back to being the"Sh-Booms." The promotional issue is shown.

Here is the stock copy on the familiar red Atlantic label 45. "Short Skirts" had the Sh-Booms included in the writing credits. This is a good two sider.

December of 1961 was the last vintage release of "Sh-Boom." This really was a reissue of the classic sides, now issued by the Atlantic label subsidiary, Atco. And, it was labeled as the Sh-Booms. This is the promotional version.

This is the stock Atco release. No apparent changes in the label design or credits. Atlantic/Atco would not have issued the record if they didn't think it had a good chance of selling some significant copies.

And just when you thought you had seen the last of "Sh-Boom", along come the Popular Five. Jimmy Keyes, Warren Wilson, Jessie Huddleston, Arthur Dicks, and Demetrius Clare were the nucleus of the group. Their first release was "Sh-Boom" backed with "Tomorrow Night" It was issued in 1967. The promo copy is shown.

This is the 1967 stock copy release with the red and gray label. The design is much different then the promo with "Rae Cox" on the left side instead of the top. Sh-Boom as you can see, is actually the "B" side.

From August of 1968, a label change to Minit and "I'm A Love Maker" was the plug side. The "B" side "Little Bitty Pretty One", which revived the Thurston Harris and Bobby Day song.

The second of two Minit label records "Baby I Got it" didn't burn up the charts, but was fun to listen to."I Don't Want To Be Without Her" was the flip side of this April 1969 recording.