Colorradio.com - Mystery Artists
Must Have Javascript on
For The Slideshow To Work 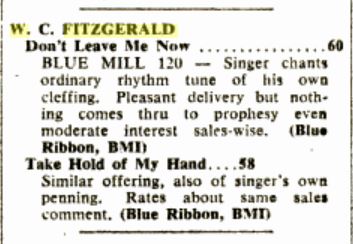 You are out record hunting and stumble across a record by a group you have never heard of, on a record label you have never seen before. You come home, slap it on the turntable, and listen. Sometimes it's great, sometimes it is just so-so. Worse yet, sometimes it's Country Western! You go to your most trusted reference book. Then another, and and another. Then you search the Internet. No luck. Then you place it on your mystery artists page, and hope someone else knows about it. Please email me if you have any information on the artist and or label.

It's not doo wop, and it's not rockabilly. It's somewhere in between. Fitzgerald tries to lean towards rock and roll, and includes a vocal chorus in the background. I do know that the label is out of Hollywood and was owned by Harry Bluestone. I don't know who W.C. Fitzgerald is, or if it was ever pressed on black wax. The only two I have seen were as shown on blue wax. This appears to be from 1956.

From Cameron Fahey of Sydney, Australia, who has the Australian release and promo material from the Leedon label, probably written in early 1957: Born in Dallas, Texas in 1938, William Fitzgerald was signed to May records in the US, then to Blue Mill where he recorded this single only a few months ago. Fitzgerald enjoyed the success of his first single, "Where's The Umbrella, Sarah?" in 1955 which was released in Australia on Coral and reached the Sydney2UE Top 40 at number 12. This record is yet to take off but is receiving pretty steady airplay at the time of typing. Be on the look out for future William Fitzgerald recordings - He's a cool cat! Record released in Australia March 1957, originally released on Blue Mill, USA in 1956.

Further from Cameron: I remember "Take A Hold Of My Hand" was played a lot in the local Sydney area, and made the 2SM Top 80, and was also covered by local Sydney Rock'n'Roll outfit Vic Sabrino, released on Pacific records. WOW! Seems like he had more spins down under than in the USA. Now we know a bit more about William Fitzgerald! Anybody else with information, especially on his other releases?

I don't have a clue who this is or anything about the label. Looks like it is the first issue on .007 records, and is a doo wopish ballad on the "A" side. The flip, "Lonely Fool" is an up tempo, pleasing song by the group. I always thought Crossroads music was associated with Savoy records. All trails seem to come up empty on this one.