Colorradio.com - Vito & Salutations
Must Have Javascript on
For The Slideshow To Work 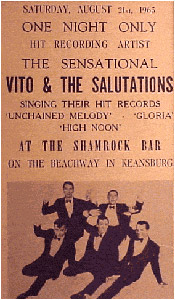 When you think of "Unchained Melody", you often remember the ballad that so many artists performed. Vito And The Salutations reworked it into a uptempo song with plenty of hooks, and crazy things going on throughout the record. It was their biggest hit, which Frank takes credit for arranging. Frank also helped write the Salutations songs, including the flip "Hey Hey Baby." Frank was also on other records including the Possessions on their Britton / Cameo Parkway release of "No More Love" and the Gold Bugs "Stop That Wedding." They were great songs that had some airplay but were not huge hits. We had a great time talking about so many of Frank's memories and his artistic work, and we played a bunch of songs that he had stories about. Below I have link to listen to the whole show, which includes some of the great music we discuss. Vito And The Salutations were from Brooklyn New York, and consisted of Vito Balsamo, Barry Solomon, Bobby Mitchell,Bob DePallo. They were on the first record, "Gloria" but after that one release, Vito Balsamo formed another Salutations group that included himself, Randy Silverman, Shelly Buchansky, Lenny Citrin And Frank Fox. They recorded several records in their career and broke up officially in 1965. Notice the lobby card on the right, and the songs they are promoting. "Gloria" was very big on the east coast, and their first regional hit. "Unchained Melody" was their biggest seller, and "High Noon" would be their latest release in 1965 when this card was printed. Ray Russell is doing the split on the right bottom of the photo, and Frank Fox is on the top row, right. 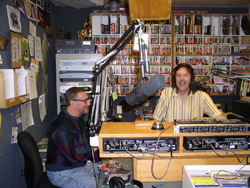 Here is Frank Fox and myself in the KVMR-FM studios during an interview on November 17,2007. Frank Fox, on the left, was part of Vito And The Salutations. We had a great time talking about so many of Frank's memories and his artistic work, and we played a bunch of songs that he had stories about. Frank is a wealth of information about the vocal groups of the east coast, and beyond. To listen to the whole show, click HERE! These days, Frank is now retired, but still singing, teaching classes for those wanting to sing, and continues with his local group, Frankie And The Fabletones. 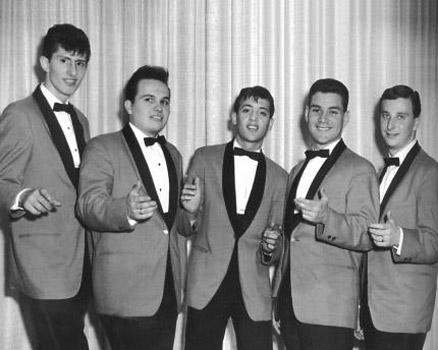 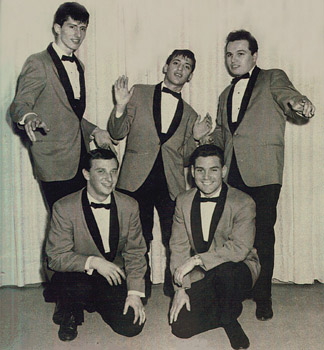 The first record released by Vito And The Salutations,is the classic song called "Gloria", done in the classic doo wop style. It was originally released in 1962 on the Rayna label shown above. The first copies did not have the line at the bottom of the label that read "Nat'l Dist By Seg-Way Record Corp. The"B" side is "Let's Untwist The Twist." It must have been a revolt against Chubby Checker and the Twist craze. Salutations member Dave Rick has writing credits for the song.

Here is the much more common issue of Gloria on Rayna. The distribution information is clearly shown at the bottom of the label. The record made a lot of noise on the east coast, and thus the distribution. There were at least seven records recorded for the label, and this one was next to last.

From 1962, this was the follow-up to the Rayna release from Vito and the Salutations. "Your Way" was the plug side, a record I always associate with the Heartbeats from 1956, originally. "Hey Hey Baby" is a cool song penned mostloy by Frank Fox. It is a great two sider but was hampered by the small label Kram, and it's ability to promote it.

This is a reissue/boot of the 1962 recordings by Vito And The Salutations. The original was on KRAM. This actually saw a little action on WGLI 1290 AM Babylon, New York. "Your Way" was listed under the "Night Train Rate The Record" section, along with "Walla Walla" by Ray Artis. The flip saw "Hey Hey Baby" for the first time.

It was off to the Billboard charts for the next release. "Unchained Melody" peaked at #66 on the charts and stayed around for six total weeks. The flip was "Hey Hey Baby", which I have always felt was a great song of it's own. This is the first of two records for Herald, which was winding down, and would close their doors a couple of years after this release.

However, there would be an issue on "Harald." I have heard stories of record companies booting their own records, so if they did, they probably misspelled it on purpose. It could also have been a boot from a budding entrepreneur, trying to make a buck. Either way, it was an early boot, as opposed to something done way after the fact.

A stop on the Wells label in 1964 with "Can I Depend On You", was next. A very good effort indeed for Vito And The Salutations. This label was distributed by Fargo - see the Aquatones. "Liverpool Bound was an average song,probably aimed at the Beatles and the dreaded English invasion. Vito and the group felt the heat just like most other US. groups.

From 1964, "Girls I know"  is a mid tempo song with the usual Vito And The Salutations style. On the flip is their version of the Silhouettes "Get A Job", and I really like it!

Taking a brief side trip to one of Frank Fox's other projects, this was an uptempo 1964 recording called "No More Love." Originally issued on the Britton label, it was pressed in both black and blue colored wax. On the flip was "You And Your Lies." Frank was on this record and can be heard very easily. Click on the "No More Love" picture above, and see a large picture of the blue colored wax issue. It has also been discovered that what looks like a black wax copy, could also be a very light red wax, if held up to a light and examined carefully. Or maybe the light bulb was redish.

The previous record on Britton made enough noise on the east coast that the Philadelphia based Cameo Parkway label decided to take a chance and distribute it on a bigger scale. The disc sold fairly well on the right side of the United States. The promotional copy is shown above.

From 1966, this is their sole release on the Boom label out of New York City. The label had good distribution potential with ABC, but was still a small lable. They had a total of just over twenty releases, and this was near the tail end of the Boom label run. This promo copy was plugging "I Want You To Be My Baby" and it was flipped with "Bring Back Yesterday.

One of at least three releases on the Red Boy label, this is a reissue of the pairing that originally came out on the Rayna label. "Gloria" and "Let's Untwist The Twist." This was from 1966.

The third Red Boy record was a reissue of "Unchained Melody and "Hey Hey Baby" that was originally released on Herald records in 1963. This Red Boy disc was Re-introduced in 1966 or 1967.

Vito And The Salutations tried their hand with a popular show tune, "Hello  Dolly." It may be the popular song you are thinking of, but if you are going to follow along, make sure you are current with your cardio exercises, as this disc goes crazy! The promo version of the Rust label 45 RPM released in 1966, is shown. They flipped it with the same song they released on the earlier pictured Wells label release, "Can I Depend On You." It is a very nice uptempo song from the group.  Sounds like the exact same take as the Wells issue.

Apparently, the last release by the group, at least in the 1960's. I show this as 1968 with a pairing of "I'd Best Be Going" and "So Wonderful (My Love)." Sandbag records was another very small New York based label, that had just a few releases in the late 1960's. 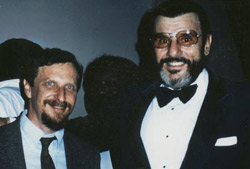