Colorradio.com - Ribbon Label
Must Have Javascript on
For The Slideshow To Work 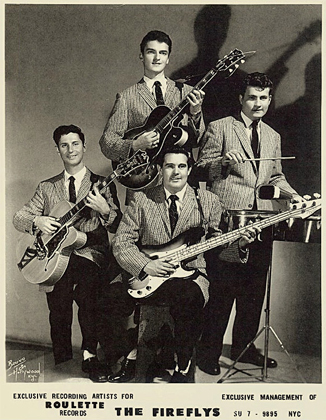 The Ribbon label had all the ingredients of starting out as a small operation that would issue some vinyl with the idea of eventually finding the next hit record. Only problem with that theory was that their first record out of the gate was a hit. Make that a number twenty one smash that stayed on the Billboard pop charts for sixteen total weeks. Owners Alan Kallman and Tom Vanando set up shop at 1619 Broadway in New York City. Kallman had other music interests before and after this disc, which included Triple X, and Gone/End - where he would have worked with George Goldner. A total of twelve known records were issued, using the numbers 6901 to 6914. I have not accounted for 6907 and 6912. The label was active from 1959 to 1960, and the Fireflies had three discs, while the related artist Ritchie Adams had two, as did the Scott Brothers. Sometimes, the name of the game with small labels was to try and get a hit record or two, and then close it down and start another label, like Leo Rogers seemed to do. Regardless, some great music was made in a short amount of time, along with a few hit records. 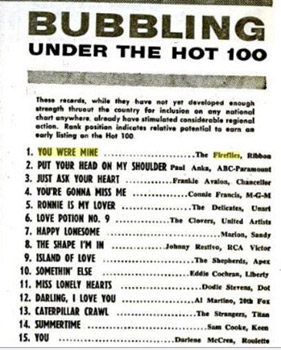 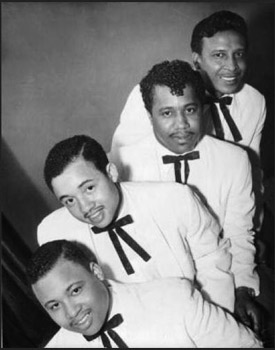 Entering the charts in September of 1959, "You Were Mine" was a huge hit. It came out on at least four different colored labels, with various printing styles. Written by Paul Giacalone, it peaked at number 21 on the Billboard charts, and lasted for an impressive 16 weeks. "Stella Got A Fella" was the enjoyable up tempo flip. The pink label is shown above.

Here is a red label issue of the hit. There was supposedly another red label that was earlier than the pink label shown above. It was darker and had lines.

A later orange label pressing that uses smaller print for the title and group name. All the information remains the same. Ritchie Adams was on lead vocals, and had partial writing credit on the flip.

Yet another variation of the orange label with larger writing. Ribbon was a record label out of New York, owned by Alan Kallman. I have never seen a true promotional copy of this record. The closest I have seen has a sticker on it, usually from a distributor who is asking for plays.

And the light blue variation. I have seen this one the least out of all colors I own. This label mirrors the style and look of the pink label the most.

This is the toughest record to find on the Ribbon label. I have Tennessee Waltz as the "A" side since the label was stuck to it. I did not see any Billboard articles or radio surveys with the record. Basically, I have bo information on the artist or group. This is a great two sided record. "Tennessee Waltz" is an uptempo version of the song normally sung as a ballad. "Put That Tear (Drop) Back" is a great vocal harmony ballad. Released in 1959, it was likely a poor seller and got lost between the Fireflies first and second discs, and I'm sure that is where all the energy from the Ribbon label was spent.

Frank Gari was originally from New York City, though later to reside in New Jersey, then to Ohio. According to Billboard, he started his career as an actor. He later wrote jingles and music for TV newscasts. Listed in the October 12, 1959 issue of Billboard as a "Special Merit Spotlight", they decided both sides were good. "Lil Girl" got some spins on WIBG in Philadelphia and WCUE in Akron Ohio. Just over a year later, he would have the first of three Billboard entries on the Crusade label, called "Utopia."

The Fireflies followed up their smash hit with another harmony gem and "I Can't Say Goodbye." Though it only reached number 90 on the charts and hung out for three weeks, it was a fine record that should have done better than it did. Ritchie Adams again on vocals."What Did I Do Wrong" was a decent flip. This entered the Billboard Pop charts in January of 1960, though the record was released in November. The promo is shown above.

Here is the stock copy. Interesting on this 45, both sides received a good amount of play on many stations, but generally, they were different stations. California and Pennsylvania were major markets and helped sell records from the exposure they provided. It started to appear on the individual radio station charts in November of 1959.

Something about Ribbon records kept landing records in the Billboard "Special Merit" section. Once again, the mag loved both Ribbon label sides and gave the Scott Brothers the Merit award. This did get a bit farther, by peaking on the Bubbling under charts at 110, for three weeks in total. Odd thing was that the Merit award came first. This looks like the Scott Brothers third release, with the previous two on the Skyline label from a year earlier. The Scott Brothers were family, Three Brothers, Horace, Warren and Amos Scott with their uncle Adolphus Scott.

The Fireflies third release on the Ribbon label did not chart nationally. "My Girl", not the Temptations song, but a different song penned by P Granahan was the "A" side. On the flip, "Because Of My Pride", was another ballad that made a good pairing. The promotional copy is shown, and was released in March of 1960.

This is the regular stock issue of "Because Of My Pride." This was to be the Fireflies last record for the Ribbon label, though Ritchie Adams would record two discs as a solo artist for the label.

Listed in Billboard under the "Very Strong Sales Potential" section, the Noteables recording of "Honeystrolling"/"Tonto" was a two sided instrumental. It received four stars in Billboard, which was fairly hard to do. "Tonto" had play on WIBG in Philadelphia, and CFUN in Vancouver BC. It did not make the national charts but was a strong entry for the Ribbon label. Released in April 1960.

Reviewed July 18th 1960, this disc had three stars in the magazine, and very little airplay on US radio stations. It was described as a "folksy Item", and the flip had two stars. The first recordings for this Brooklyn native were on Brunswick in 1957. Many follow-up records were issued over the years. Rusty Evans also jammed with a then unknown Bob Dylan in the early 1960's, and he wrote and produced an underground classic "I'm Five Years Ahead of My Time" for Third Bardo.

The first of two records on the Ribbon label for Ritchie Adams, "Lonely One" was the plug side. It is a mid tempo commercial pop side that is pretty good. On the flip, "Tell Me Baby Did You Wait" is up tempo and asks the question of his girlfriend, hoping the answer is yes. Issued in 1960

The second Ribbon label release for the Scott Brothers,did not make the billboard charts. "Lost Love" backed with "Only Then" was another great outing for the group. Forget the Merit release, this time it was a Billboard Spotlight Winner Of The Week. That meant that according to Billboard, it had the strongest sales potential of all records reviewed that week (June 27 1960). That was a decidedly bigger step up in the Billboard world. The Scott Brothers issued some 15 records in their career. They were another one of those groups that had a great sound and should have really sold more records than they did.

This is actually the second and final release by Ritchie Adams for Ribbon. "Back To School" is an up tempo fun song and was recorded in 1960. How he could remember all the names of the girls in a string that gets sung out TWICE, is beyond me! The flip side ballad "Don't Go My Love Don't Go" sounded like something the Fireflies would record, but the same female singers used on the "A" side help on this one.

I can trace the Paulette sisters back to at least 1945 on a 78 with Connee Boswell for Decca. They must have recorded twenty records in their career, including "Never Smile At A Crocodile" on Columbia from 1953 (Peter Pan). Promotional pictures normally show three sisters, Betty, Jane, And Gloria. Early on they were a quartet (Barbara). The Paulette Sisters had the last record on the Ribbon label. It was an answer to the first record on Ribbon (You Were Mine), called "I Was Yours." It's a really good record, partly because of the infectious medley, and also because of the good lyrics for an answer song. No chart action at the national level, and I have yet to see a local chart with the disc on it, though I bet somewhere a DJ spun it up. Issued in September 1960.

Updates: As mentioned earlier, issues 6907 and 6912 have not been accounted for and were likely never released. All others are accounted for, though there may be a couple of promotional issues not shown. The label was short-lived, but still managed to have some hits, a bubbling under record, and a fair amount of really good press from the trades. They ran out of hits, and probably money and folded after a little over a year of operations.